45 or 50 Democratic Senate seats… but not in the middle? 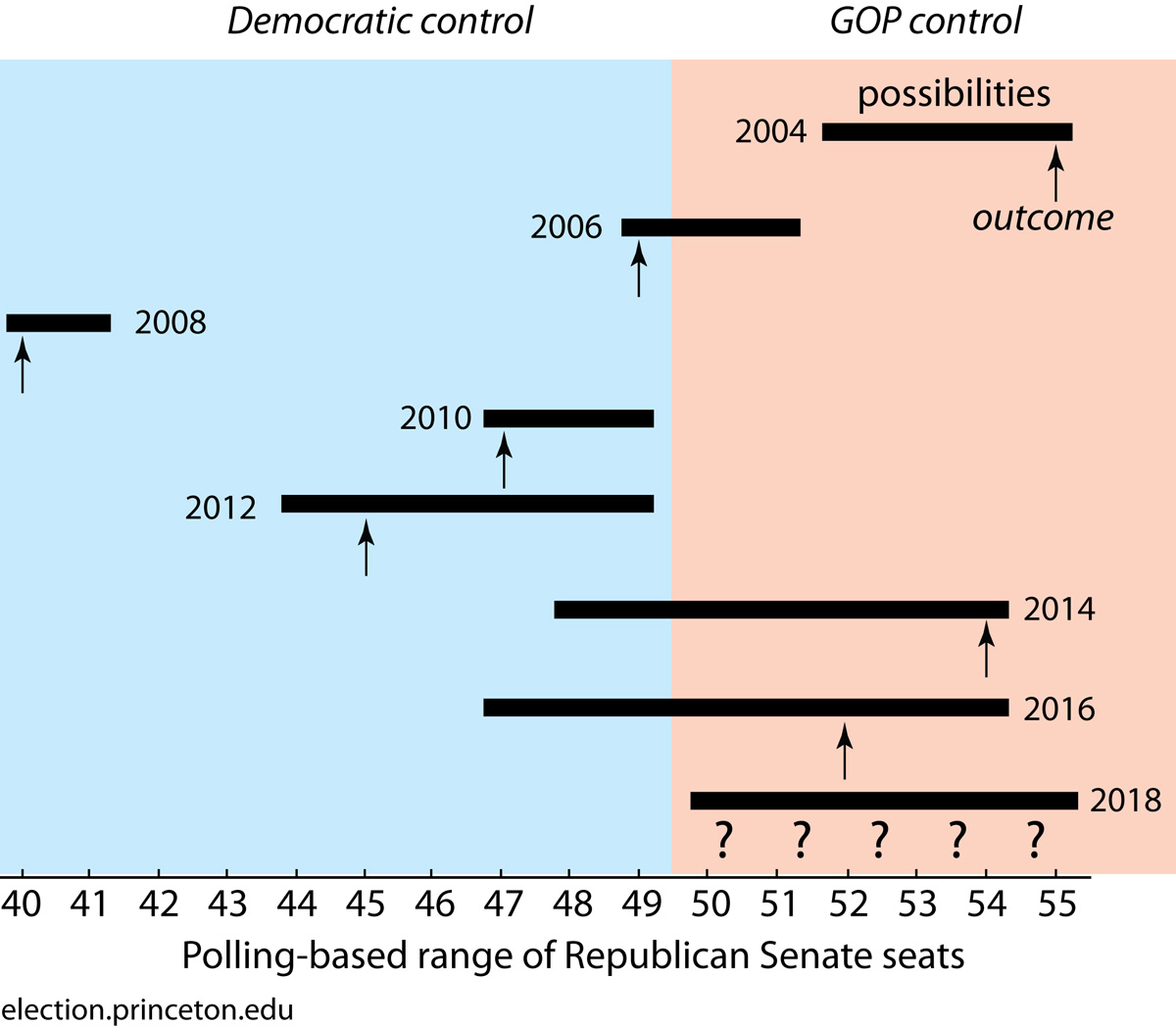 Four years ago, me shown that Senate races almost all tended to go in one side or the other’s direction. Since then, the idea has stood up quite well. It implies two possible very different futures. There are a few races I will follow on Tuesday to find out which one is ours.

The overall pattern above fits in with two opinions: (1) The vote omits a bit of enthusiasm for the winning side in the presidential election years. (2) The polls also failed to catch the energy going against the party of the President in the mid-term.

The chart shows the likelihood range in races where the polls show the race in about 3 percentage points. 2014 is less consistent with the model, 2016 is less.

In 2014, the President’s party (the Democratic Party) had a midterm election that went against them beyond what the polls showed. It was the election with the lowest voter turnout since 1942. This may help explain the systematic voting error, which I estimates is more than five points.

In 2016, the results were in favor of Republicans, but less. Compare with the last poll, the unexpected winners were Republicans in Pennsylvania, Wisconsin and Indiana. Democrats still won in Nevada and New Hampshire.

An overall error as small as two percentage points results in quite different results, at either end of the range:

Future number 1: Democrats win 50 seats. This future corresponds to the idea that there is potential support for outsiders, ie the Democratic Party. That would lead to 50 Democrats / Independence seats.

The argument in favor of this idea was the dissatisfaction of Trump. The argument against this opinion is high voter turnout reports, which is a situation that polls must be able to cope with. If there was a probe error, I guess it wouldn’t be as big as it was in 2014. But the two-point error is within the range of possibility. Democrats won 50 seats. I think this is more likely to happen than people realize.

What happens in a divided 50-50 Senate? The last time this happened, in 2001, there was a share of power. But those were very different times, and the Senate is now much more polarized. Think of the possibilities: Pence is stuck in the Senate all the time to break the relationship, or the Democrats try to recruit Murkowski on their side. That would be quite a show.

In addition to this 50-seat scenario, as an outside possibility, I would follow the Tennessee race between Phil Bredesen (D) and Marsha Blackburn (R). Tennessee is a state with a low turnout of voters even during the presidential years. This year, vote early shows that the number of voters in Tennessee under 50 has increased. So there are some reward opportunities hidden there. However, Blackburn leads the polls with an average of 5 points, which is a fair number. If Bredesen wins, that would significantly increase the odds that Democrats can win 51 seats. It was a long shot.

That’s in contrast to Texas, where early voting is available adopted the 2012 Presidential Number and possibly level 2016. Does this mean there is a hidden reward for one party or another, or does it mean that the polling will be more accurate? I think the polls are correct and Cruz will win, but we’ll find out.

Future # 2: Democrats finish with 45-46 seats. In contrast, the race to enter the Arizona Senate saw Kyrsten Sinema (D) lead about 3 points over Martha McSally (R). If McSally wins, it would show a Republican favor vote error and an overall bad result for Senate Democrats.

I guess there is Future # 1.5 too, the average is 47-49 D. That’s not nearly as good as Republicans had hope for a few years ago. But it is not a dream result for the Democrats either.