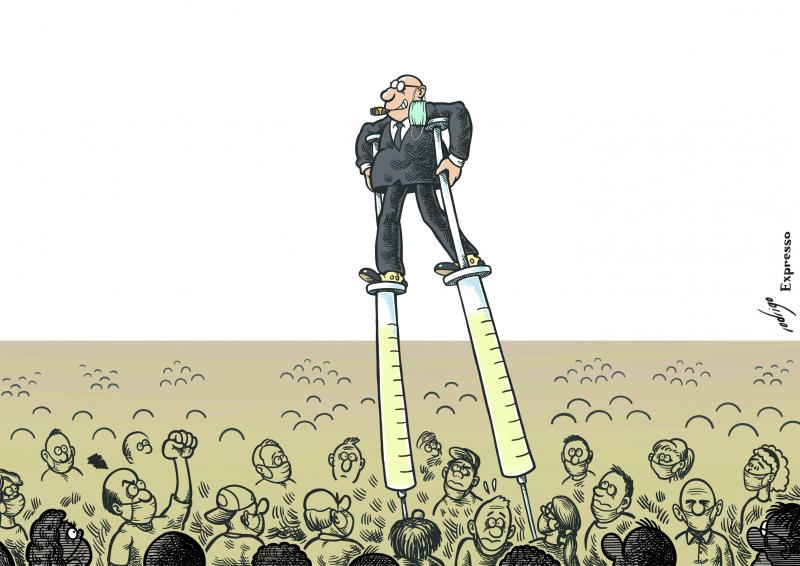 To save as many lives as possible, while at the same time ensuring pharmaceutical companies secure profits from the vaccine race: this is the EU’s “Impossible Mission”, facing the catastrophe human robbed killed more than 2.5 million victims.

European leaders know that the priority is to protect lives, including those potentially infected and those who lose their livelihoods due to locked homes. However, they do not dare to sacrifice the profit engine that drives our growth. On the one hand, they want mass vaccinations; on the other hand, instead of democratizing the industry on which this process is based, power remains in the hands of some, slowing it down.

Openly, both the European Commission and the 27 EU presidents have preached the urgency of making Covid vaccine accessible to everyone, when in practice they hesitate to force ” Big Pharma “outsourcing production stages to speed supply and usage.

Charles Michel, President of the Council of Europe, recently contradicted himself over a period of several weeks. First you suggestions Article 122 of the Lisbon Treaty can be used for the centralization of mandatory (usually national capacity). Then, in early March, for one letter Before the European Parliament, he denied that patent monopoly was an issue.

Currently, the only compromise approved by the Commission to ensure EU supply is partial restriction on export of vaccines. This only leads to a decrease in defenses against the virus among other populations, without necessarily causing businesses to be more cooperative.

Progress is slow across the EU and the world

Big Pharma (the most profitable company in the industries) has promised to produce billions of doses, but the only immediate consequences are increase their stock prices. Meanwhile, uncertainty remains about the distribution schedule, the main driver of mass vaccination.

For the attainment of the collective immunity necessary to relax restrictions, Allianz Research It is estimated that each week delay causes the EU to lose nearly 18 billion euros of GDP. If the five-week gap calculated by Allianz at the beginning of the year is not recovered, by the end of 2021, the overall damage would be around 90 billion euros. The recovery is predicted by the Commission, assuming 70% of vaccinations in the fall (herd immunity), would then have to be modified from the top.

According to fresh OECD dataIn recent weeks, the largest member states have doubled the average daily vaccination rate of the population. This allows them to close the gap with the US and UK, which have already ordered and approved vaccines ahead of time and managed to vaccinate their citizens four times faster than the EU (still around). 30th in the world in vaccination density).

The current doubling rate increases the immunization capacity of at least the most vulnerable groups (20-30 percent of the population). Even in such a scenario, according to Allianz, there would still be a three-week delay with a total cost of up to 63 billion euros. To catch up, it will have to accelerate even more, reaching daily vaccination rates of one percent of the population. “This could be envisioned if the production bottlenecks disappeared by the end of Q1 2021. For example, through the approval of a new vaccine (in best case only one injection) or development development of new production sites. “Ultimately, however, it is the pharmaceutical giants who decide the number and types of plants that can go into production.

The WHO General Assembly took place only in November last year agreed on fully voluntary mechanisms to address injustice. Big Pharma has omitted Covid Technology Access Group (C-TAP) to share patents and technologies, and Covax, a global fund designed to bring together countries to strengthen the ability to negotiate and reach a fairer agreement on vaccines for all. With choice, pharmaceutical companies prefer to negotiate with individual countries: they ship first to those who pay first and most.

So far, they have promised Covax a less than 2 billion humanitarian doses, subsidized by richer economies (up to 6 billion euros, of which about 1.7 billion by the European Commission and EU member states pay, half of what the new country provides. have installed Biden administration in the US). This is just enough to vaccinate 20 percent of the population in low- and middle-income countries at the end of the year (calculate one double vaccination per person for full protection).

The EU has paid 2.7 billion euros in deposits to suppliers to support its efforts to reach a negotiated output (more than 2.5 billion). Member states may donate excess quotas to countries in need, even though they need the consent of the producers. Unfortunately, hardly much, given the announced delays that have dragged on so far (Pfizer, Astrazeneca Johnson & Johnson). With unforeseen crop yields, The companies refused to tie themselves to exact deadlines. This is clearly seen in Agreement has not been implemented yet signed by the European Commission with AstraZeneca, Curevac and Sanofi.

Commission President Ursula von der Leyen admits that “we have underestimated the production shortage”. For Scott Marcus, an expert at the Bruegel Research Center, “The commission started well by negotiating the same vaccine on behalf of all member states. But it is a mistake to wait until the end of fall. Newly ordered by 2020 and in very limited quantities, (more expensive) Pfizer and Moderna vaccines have proven a high degree of effectiveness against other vaccines.It prolongs negotiations for a lower price, but In the end, the price of this vaccine is much lower than the proportion of GDP lost due to insufficient immediate doses.

The Commission’s chief negotiator Sandra Gallina stepped back in late February to end additional purchases from Pfizer and Moderna, after admitting delivery cuts from AstraZeneca.

Our survey found that the cost of vaccines per citizen was about the same across the EU, if somewhat higher than in Central and Eastern Europe, due to less purchasing power.

The cost-benefit ratio is clearly higher in the countries most severely affected by the pandemic, where the cost of purchasing vaccines is only a fraction of the damage caused to the economy in 2020. due to lack of immunization.

Catherine Smallwood, expert at WHO’s Emergency Unit, warns: “We need to vaccinate even areas far from us, otherwise the new variants can spread in Western countries,” said Catherine. Warns Smallwood, an expert at WHO’s Emergency Unit. “If the poorest regions on Earth are not fully managed until 2023 (according to current forecast), The EU and the entire planet will lose 33 and 128 billion euros each year due to cross-border restrictions on the movement of people, goods and services, ”says Marco Hafner, Economist at Rand. Corporation and the author of one learn Prove that every euro spent globally on vaccines saves four times more economic losses.

👉 The source of data used in this article.