European Union diplomat Josep Borrell: “I should satisfy my desire to argue a little more.” 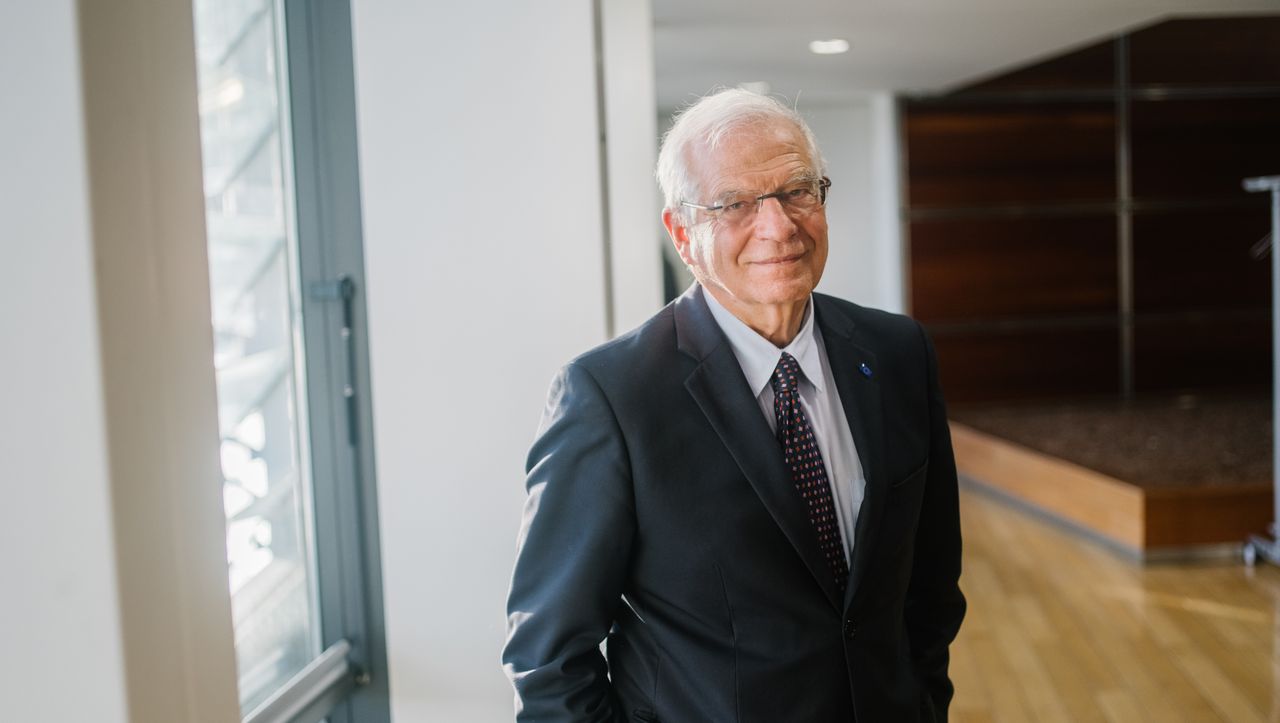 Josep Borrell, 73, does an interview on the 12th floor of the Berlaymont building in Brussels. A satellite image of Europe, on which a cloud can be seen, hung on the wall behind his desk at the European Commission headquarters. But then risk Along with a trip to Moscow in early February, the European Union’s top diplomat has come under great pressure.

MIRROR: Mr. Borrell, a Spanish newspaper once testified your “volcanic character”. But where is that volcanic character when Russian Foreign Minister Sergey Lavrov publicly embarrassed you at a recent press conference and Moscow expelled diplomats from the following three European countries?

Borrell: In fact, I’m famous for being the one who reacts immediately and doesn’t dodge an argument. But on this occasion, when I heard the comparison of Navalny’s case with the Catalan team, who were condemned for their role in the referendum on independence, I included a dialectical war. with him in front of the camera. But I decided not to do so. I don’t go to Moscow to talk about Catalonia. I decided to keep calm.

MIRROR: To many people, you seem powerless rather than calm.

Borrell: I don’t think you would say that if you had seen our meeting behind closed doors. I looked Lavrov there and told him very clearly what I think about the human rights situation in Russia. I call for the release of opposition politician Alexei Navalny and an independent investigation of the poison attack against him and criticize the arrests of protesters. Lavrov then warned me.

MIRROR: What did he say?

Borrell: He asked me if I wanted to talk about Navalny’s case at the press conference. Lavrov said Russia would not accept what it called interference in internal affairs.

MIRROR: You are a Catalan, but you deny the region’s independence from Spain. That is a weakness, Lavrov said.

Borrell: There is a Spanish saying from bullfighters holding red cloth in front of bulls: “Run into red.” Basically, that means falling on someone’s line. I don’t want to do that. I do not see the press conference as a place for public dispute. The debate should take place behind closed doors. And there are things that have been very clearly shown conditions.

MIRROR: Lavrov also said that the EU is not a reliable partner. You should fight back.

Borrell: Me too. I told him that relations between the EU and Russia were low, that we see Russia as a rival, that we strongly condemn the poisoning of a Russian citizen and the way the judiciary acts. .

MIRROR: So in your opinion, did you get everything right?

Borrell: Is not. When many people believe that I should have reacted more strongly, I will not contradict them. I should probably also satisfy my desire to argue a little more in front of the camera. If this happens again in the future with Mr. Lavrov, I will have to go into the red cloth.

MIRROR: Sanctions against Moscow following the annexation of Crimea and the occupation of eastern Ukraine were largely ineffective. What new sanctions will the EU foreign ministers agree on this week?

Borrell: This is the first time we have used the European Union’s Human Rights Sanctions regime. We are using it to punish those responsible from the security apparatus and the judiciary who have been involved in accusing Navalny and suppressing the protests. These sanctions have a very high symbolic importance. And the current sanctions related to Ukraine are having an impact: They increase the economic and political costs of Russia for illegal actions against Ukraine.

MIRROR: Wouldn’t it be more effective to ban Russian financiers from entering the EU and freeze their foreign assets?

Borrell: If the EU freezes its assets, the EU must be able to defend that in court. Any tycoon can sue for that move in the EU. Then we’ll have to explain exactly what that person has to do with poisoning or accusing Navalny. If we as the EU want to maintain the rule of law, the law must apply to everyone.

MIRROR: The EU may have safely imposed much tougher sanctions on Russia. Why not?

Borrell: Sanctions are just a tool, they do not replace policy. We have to do other things. In the case of Russia, that policy has to do with three things: We have to push back, we have to restrain, and we have to get involved.

MIRROR: Contains Russia? That sounds like the native language of the Cold War.

Borrell: I’m talking about targeted actions. Obviously we must push back when Russia violates international law or human rights. We must restrain or restrain Russia when it puts pressure on us through cyber attacks, through misinformation or by occupying the territory of sovereign states.

MIRROR: One measure that could hurt Moscow is the complete suspension of the Nord Stream 2 project that would allow Russia to sell natural gas to Germany through a direct pipeline. You said that this is a decision by the German government. But isn’t the greater political pressure on Berlin justified here? After all, a number of EU member states were strictly opposed to the project.

Borrell: The European Commission, of which I am a vice president, has repeatedly said that Nord Stream 2 is not helpful in contributing to diversifying energy supplies for Europe or the EU’s energy autonomy. But the Commission cannot prevent private companies from deciding to invest their money in an industrial project.

MIRROR: The German government asserts that Nord Stream 2 is a pure economic project, not a political project. Are you convinced by that argument?

Borrell: Projects of this size can never be purely economic. There are geopolitical considerations, like it or not. And geopolitics also played a key role in the decisions for Nord Stream 2, which is pretty clear.

MIRROR: Your visit to Moscow also shows that Russia does not see the EU as a foreign policy participant.

Borrell: Moscow has always had ambitions to negotiate bilaterally with the member states of their choice and through the EU. We absolutely mustn’t let that happen. When we sum up our influence, we are in a stronger bargaining position – not just with Russia.

MIRROR: That statement doesn’t seem to have appeared in the EU yet. Its members often disagree over foreign policy, but all decisions in this area must be made unanimously.

Borrell: I would certainly have been easier if we could remove the consensus rule in foreign and security policy and make the decision of the qualified majority. Not only did that make things easier – debates also suddenly came to life a lot. As long as everyone has veto power, you’ll have less incentive to engage in a large discussion. When in doubt, they can simply block everything.

MIRROR: Were individual EU states willing to give up their foreign policy veto?

Borrell: I don’t think it will happen during my tenure. But to move from unanimous to qualified majority, we need consensus because this decision must be made with consensus. And there are many countries that take their veto very seriously. This means I spend half of my time working internally on EU diplomacy.

MIRROR: The European Union’s global influence stems primarily from its power in matters of trade and the attractiveness of the so-called soft power model of democracy. Should military power be added as well?

Borrell: If one day we really do have a common security policy, we will also have common defensive capabilities. Maybe one day we will even be a military alliance. But in the short term, we are not like that.

Borrell: The combined European countries spend almost three times more on defense than Russia. But no one can argue that Russia has much greater military power and is willing to use it. EU member states are prepared to protect their interests, even militarily. Just not under the European flag.

MIRROR: Was it because of the Germans, who were particularly reluctant to send their troops on foreign missions?

Borrell: Because of its history, Germany has certain limitations when it comes to participating in foreign military activities, and I understand that. But there is growing awareness that we live in a dangerous world and that military involvement is in the interests of the EU – especially in the challenges that NATO does not take.

Borrell: To be honest, I don’t see NATO working in the Sahel. However, someone must do it. Today, it is a number of EU members. But I believe we can do this much more effectively if the Europeans synthesize their military prowess.

MIRROR: Do you think the EU’s soft power has been affected by the aura crisis? Some Asian countries have done a better job of controlling the virus, and countries such as the United States and the UK are showing the EU how rapid immunization can be done for their citizens.

Borrell: I believe that it is the right decision for EU member states to buy vaccines together instead of competing.

MIRROR: But in America, people are being vaccinated at a much higher rate than here.

Borrell: That is true, and so is the UK. That might be the initial price paid for acting together. It is possible that a few countries will get more vaccine if they just use that vaccine. But then everyone else will have to wait longer, and in the long run, no one will benefit.

MIRROR: Let’s ask this question in a more stark way: Should people in Germany or France be risking their health to get vaccines to Malta or Estonia faster?

Borrell: Let me return that question to you decisively: Is the health of a German worth more than the health of an Estonian? It is the essence of the EU to respond to challenges with greater solidarity and mutual strength. And that’s what happened with vaccine procurement.