Alen sat there with a familiar anxious feeling that had been so profound of late, but never to this extent. Alen thought of the questions as they raced through his mind “what would it be like to venture out into unexplored areas of space? How would it feel to have to leave your home, your family and your planet without knowing whether you will be fortunate enough to return someday?” All of these questions were uncertain for now and yet Alen had one certainty; he wasn’t going to back down after everything he went through to get here.

Many had dreamed of exploring unknown areas of space before, the wanderlust and curiosity of what else might be out there. But few had the initiative or the ingenuity to go through with any of these seemingly far fetched dreams. Alen was a far cry from these people. He devised a plan to venture into the unknown in terms of human expedition, a plan to go to Mars itself. Despite widespread speculation towards this idea, Alen poured vast time and resources into what he knew would be the next frontier for humanity.

Alen started a project to not only get to Mars, but to start a self-sufficient colony there. He knew from the beginning that this would be no easy feat. But he was also aware of how much weight such an achievement would carry, as for humans to be able to lay claim to inhabiting a planet outside their own would be the greatest achievement in the history of any known species.

Alen experienced all these thoughts of how many restless nights he had whilst working his way towards turning his dream into a reality, the determination it took from everyone involved just to get here and the bravery involved in going on such an extraordinary expedition. After what felt like an eternity of thoughts of the distant past racing through Alen’s mind, he gathered himself in the present moment as the countdown began. Everyone on board soon felt the thrusters start as they suddenly left the ground. As they left the Earth’s atmosphere the crew knew that if all went to plan they would soon be the first to set foot on the Red planet.

After a lengthy journey Alen and his crew finally landed on Mars. All the time they spent planning and preparing was finally actualised. They set out and started working on constructing the first human colony on a planet alien to their own. It was going to be a strenuous task, but the planning and hard work they had already done was the much needed blueprint for their mission. The colony was made as a large structure and within it was all the essential needs for its inhabitants. Inside the structure people could live without the aid of space equipment as the atmosphere was suited to humans. The people of the colony were able to go about their day freely because of this. Alen decided to name the colony ‘Archangel’. 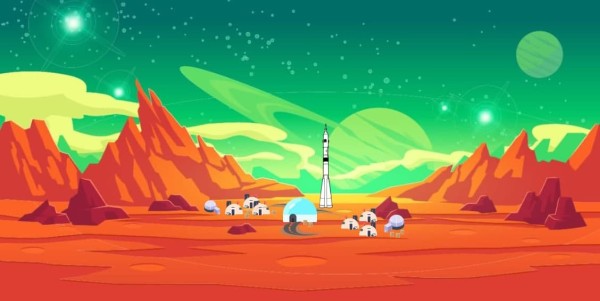 With the colony set up and its inhabitants safe, Alen wanted to see more of what the Red Planet had to offer. He and his crew set out to descend into a nearby cave structure, with excited thoughts of potentially revolutionary scientific discoveries. The crew were filled with a nervousness that formed as a chilling feeling that ran down their spines. Their minds bordered between the near blinding need for discovery and the innate feeling of the fear of the unknown. Finally, they arrived at this cave-like structure and began to descend. The further the cave went the harder it was to discern one object from another as the cave was veiled in darkness. Alen and the rest of the crew members observed the cave walls using their torches, noting some of the walls to be a mix between solid and liquid, as if it was some sort of ‘slime-like’ substance. During the descent, Alen pricked his finger on a sharp object and he started to bleed. The crew came to his aid and helped to patch up the hole left by this object. Though Alen wished to continue the endeavour of exploring the structure, he and his crew agreed that getting him back to the colony was the wisest thing to do. As they ascended one of the crew members’ equipment came loose and he almost slipped and fell into the abyss below. Despite originally wanting to explore the cave in detail, Alen decided that they should exit the structure as soon as possible as the safety of his crew was of utmost importance. It was clear that they were unprepared to venture any deeper into the cave and it was decided that they would return once fully prepared.

Having already succeeded in his mission to create a habitable colony for humans on Mars, Alen decided it was time to return home. There was much that he needed to accomplish on his return to Earth that would prove crucial to further projects to take place on the Red Planet. In a separate vessel to the spaceship that he arrived in, Alen charted a course for Earth. The journey home wasn’t as troublesome as the journey to Mars as the journey had already been made in the opposite direction. Despite this, Alen was alone in his smaller, more confined ship which was built adjacent to the original vessel. Alone to his own thoughts during this time, Alen thought mainly of his family that he had spent so much time away from. When he finally returned home Alen was greeted as a pioneer in space exploration and was seen as the face of the future for human civilisation. There was much for Alen to do upon returning to Earth but his first order of business was to visit his family. Over the coming months he attended important meetings to discuss his plans for the future of Mars and the potential of other colonies. During this time, however, it became clear that communication with the existing colony, Archangel, had abruptly stopped. There seemed to be  no previous indicators of a reason for this abrupt loss of contact which led many to believe it was due to an issue with the communication devices. Alen had originally suspected the lack of contact was from weather interference but as the days passed it his theory became less and less likely. Keeping a firm and unwavering exterior, he proceeded to plan another trip back to the colony alongside his most trusted team members in order to get to the root of the problem. Although he seemed unphased by the situation, Alen couldn’t help but recognise the feelings of dread which occupied the back of his mind.

He sat there with feelings of nervousness and dread, familiar feelings at this point but now more poignant than ever before. Yet again, thoughts raced through Alen’s mind as the countdown began. He pondered the question of whether or not it was merely a communication issue, or perhaps something more sinister. These thoughts lingered in Alen’s mind and when one thought faded another emerged to take its place. There was even more anxiety towards the journey to the Red Planet now, not because of the uncertainty of making it to Mars, but rather the uncertainty of what might be waiting there once they arrived. The red dust began to disperse as Alen’s vessel came closer to landing. As he and his crew stepped foot on the rough sands once more they could feel an eerie tension in the air. They made their way towards Archangel as they began to peer through the sands that had been racing through the air. The first thing they noticed was an uncanny lack of life from the colony. It looked as though it had been abandoned, but the crew knew that this couldn’t have been the case.  They got closer to Archangel, and through the sandstorm they began to see the silhouette of a man far off in the distance. Puzzled as to why this man was alone during a sandstorm outside of the colony, the crew started waving their arms at this man. The sandstorm began to settle as the silhouette became clearer; Alen and his crew quickly realised that the silhouette was not of a man, but a mutant. This mutant bore a striking resemblance to Alen himself… 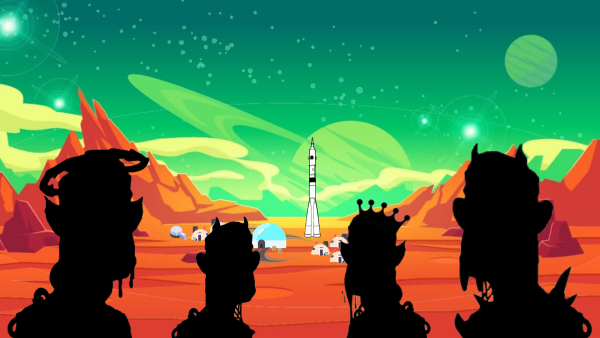