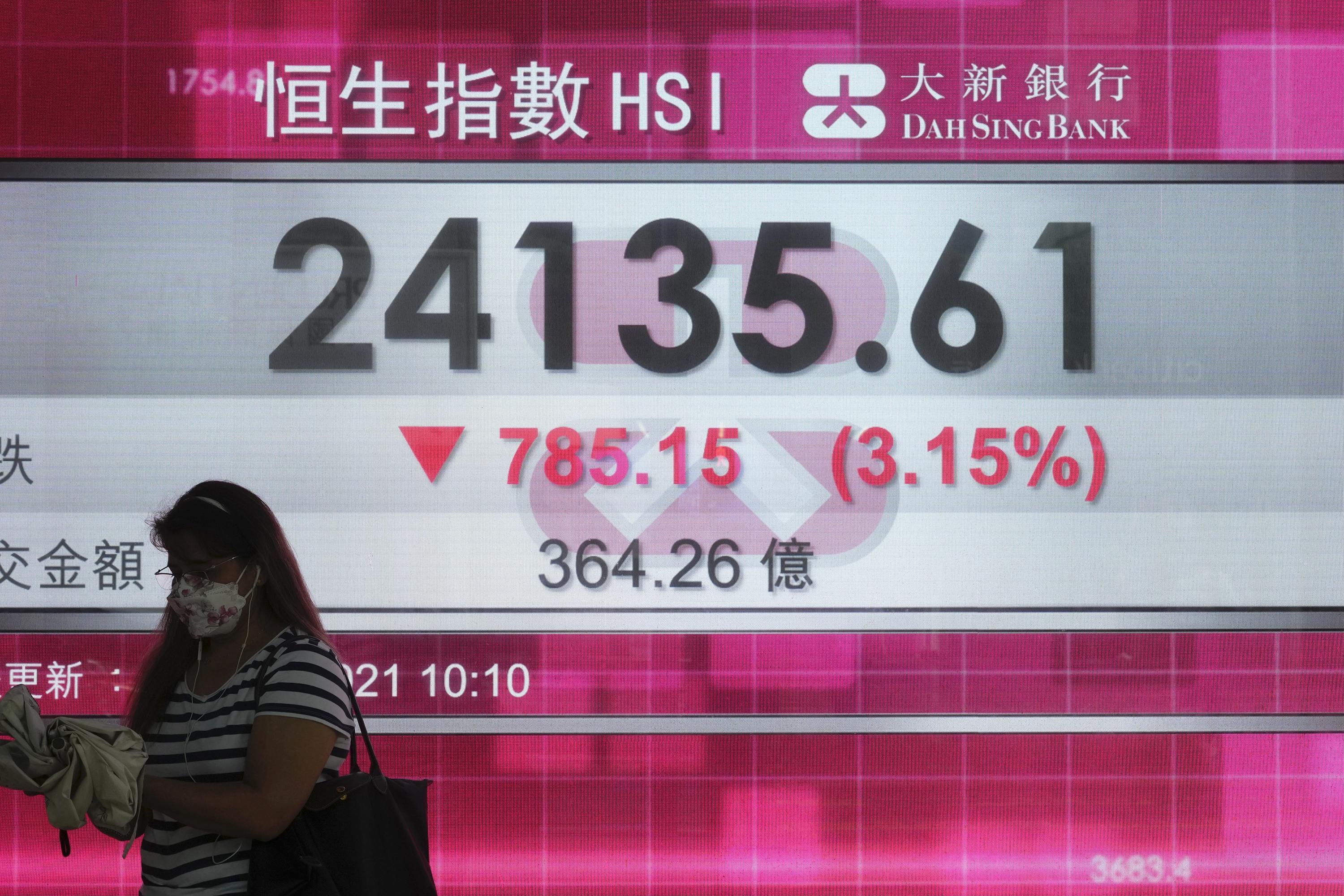 Shares fell nearly 4% in Hong Kong on Monday in holiday-thinned trading in Asia, with other big markets in Tokyo and Shanghai closed.

Other regional benchmarks also fell after Wall Street wrapped up last week with another decline.

Investors are watching to see whether the Federal Reserve will take any action to address the impact of rising prices on businesses and consumers.

Worries are mounting, also, about the U.S. debt ceiling. House Democrats said Friday they planned to move this week to suspend the cap on the government’s borrowing authority, and the White House ratcheted up pressure on Republicans by warning state and local governments that severe cuts lie ahead if the measure fails in the Senate.

Hong Kong property companies and banks lost ground on persisting concerns over the potential for ripple effects from the financial troubles of Chinese developer Evergrande.

The company was expected to miss interest payments, as ratings companies forecast it may default on its debt. Its shares fell 17% Monday.

Henderson Land Development dropped 12% and New World Development lost 11% amid reports that China would tighten oversight over the property sector in Hong Kong.

“Asia is off to a nervous start today with liquidity seriously thinned by holidays,” Jeffrey Halley of Oanda said in a commentary. “The list of circling sharks is long, starting with increasing noise from the U.S. about the debt ceiling.”

The Fed is due to deliver its latest economic and interest rate policy update on Wednesday. The central bank has said higher costs for raw materials and consumer goods are still likely to be temporary as the economy recovers, but analysts worry that higher prices could stick around and dent companies’ bottom lines while also crimping spending.

Stocks closed lower on Wall Street Friday, marking a feeble ending to an up-and-down week of trading. The S&P 500 index lost 0.9% to 4,432.99, for its second straight weekly loss.

Roughly 80% of the stocks in the benchmark S&P 500 fell, and every sector except health care was in the red.

Technology and communications companies were the biggest drags on the market.

“Quadruple witching,” the simultaneous expiration of four kinds of options and futures contracts, contributed to market volatility. The phenomenon happens four times a year and forces traders to tie up loose ends in contracts they hold. More than 750 billion single stock options were due to mature Friday, said McKnight.

Brent crude, the standard for international pricing, lost 56 cents to $74.78 per barrel.