Ice cans down the street 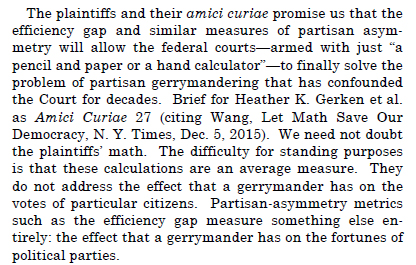 Ice cans down the street

From comments (click on image for full decision):The Supreme Court has an opinion on the lawsuit against Gill v. Whitford and Benisek v. Lamone. First, the good news is: The courts love our math! The bad news: they thought it answered the First Amendment request and they decided this was the case with the Fourteenth Amendment.

In summary, the main points:

The next front is state reform. In places like Michigan and Virginia, state-by-state voter initiatives and laws could do what the Supreme Court did not do today. So our plans at the Princeton Gerrymandering Project will move forward!