In the last Senate polls, a little signal – or noise? 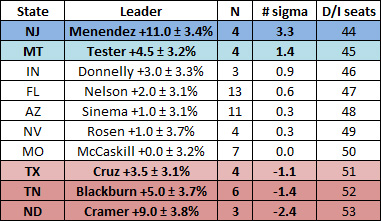 I assume you all voted. And donate to one of the organizations on the left sidebar. Maybe you even voted! OK, now let’s look at the final developments, which are a bit of a surprise.

The 3.1% measurement uncertainty covers the 3 polls’ system failure points, based on the last midterm election. That is a lead of 3.5 / 3.1 = 1.1 sigma, which converts into odds of about 4-1 for Cruz. This is not a panic game. I think the reports of Beto’s electoral demise are too early. I don’t know who will win, but it could be very close.

And other races? This is the last survey week (the date ends October 29 or later). Except for Tester, there is a small but noticeable movement for Team Blue. Look same Kavanaugh returned it is almost over.

There are five races within 1 sigma: Indiana, Florida, Arizona, Nevada and Missouri. All except Missouri show the Democratic candidate a slight lead… but with an individual probability of winning between 0.2-0.8 for either side.

Meta-Margin is R + 4.2%, meaning the performance is too high for control to be a perfect kick. Lucas Manning (PEC webmaster) and I will use this data for the last update to the history tracker.

System (IE correlation) error will be known after the election. In the Senate, it does often falls towards popularization by the President (un). Democrats can win all five races, including Missouri (or they can lose an entire year). If that happens, then the Democrat + Independence party has 50 seats. On the other hand, a presidential party favor error is less common but will result in 45 D + I seats.

Of course, Democrats can also fail. It’s easy to see that happening, especially in Montana, Missouri, and possibly Indiana. Now we know the Senate will be watching closely!

And, to be clear: if all the close races fail against the Democrats, the race in Texas is really going to be very important.