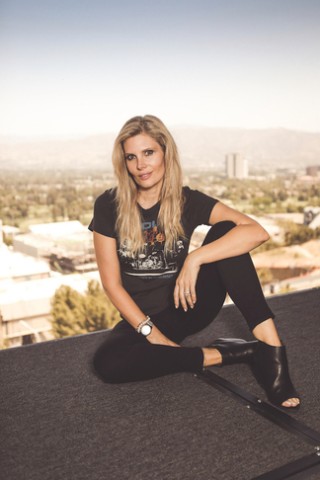 Miami, FL – March 21st, 2022 – Just last year Karina released her first book “Meet Nashville’s Rising Stars” which was met with rave reviews. “This was really a passion piece for me”, says Michel. “It’s always fun to write about people and things that you enjoy, but even better when you hear others appreciate it as well.” “I love Nashville.. it’s a wonderful city with a lot of undiscovered talent and a great vibe.”

When she’s not producing films you can catch her hosting her multi- award winning podcast Coffee with Karina – Entertainment Unfiltered where she has interviewed Don McLean, and some of the hottest up and coming talent. “I don’t really think of it as an interview – it’s a casual conversation where we talk about whatever is relevant really”. I want the listeners to feel like they’re in on something that wasn’t planned, as it never is. I have an idea of how it starts, but past that I let the conversation be organic and just have some fun.” Coffee with Karina has just wrapped its third season and will be back in early summer. The podcast has really followed and been influenced by the trajectory of events in her life. In January she was involved in a car accident, and explains how she’s been taking time to rest and heal from that. “I really didn’t know where I wanted to take everything next, but it became clear to me after going through all of that. I could either sit and feel sorry for myself or get out and go to physio a few times a week and get my health and motivation back.” Season 4 will be about “Mindset”, which Michel says is the foundation for succeeding at anything in life, and will feature some of the best in business and entertainment.

Karina’s not opposed to taking a break and stepping back until something catches her eye for her next project. The past year she’s been able to volunteer every week for a program called “Jobs For Life” through “The Way Center” in Haines City, Fl. Michel says It’s been a life changing experience and enjoys getting more involved with her local community in Central Florida. So much so that it sparked some ideas and she is currently working to put together two documentaries that focus on social change and believes these will raise some relevant questions. “It’s too early to talk about it now, but it will be soon and I’m excited for that moment.”

When asked about being a part of Rolling Stone’s Culture Council and her plans for the rest of 2022 Michel says, “I have plans to visit family in Europe, enjoy every moment and not take anything for granted. There are many possibilities in life and it’s all how you look at it. Writing for Rolling Stone’s Culture Council over the last year is honestly a dream come true. It’s just the icing on the cake!”