Myanmar on the Brink – The Diplomat 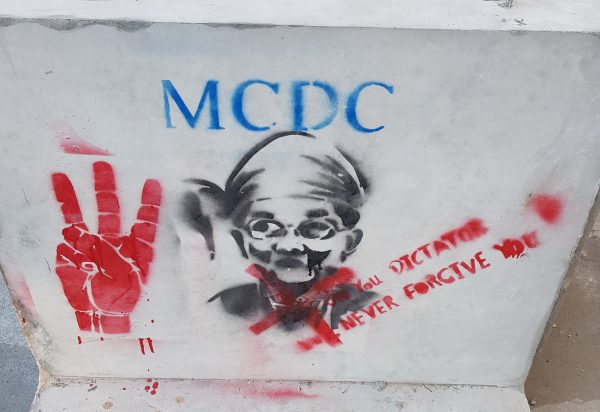 After two months of military rule, at least 581 protesters was killed in Myanmar. More than 100 people died on March 27 alone, and the events that happened that day seem to have catalyzed the development of both the opposition movement’s long-term plan and its response. ethnic minority insurgent groups towards the protest movement. During February and March, ethnic minority insurgent groups, which manage autonomous regions on the outskirts of the country, are now becoming refugees for protesters fleeing regional areas. trung, did not take advantage of the obvious opportunities that the emergence of the protest movement brought. they with.

There are fewer fighters and many weaknesses in service that are the result of years of bombing campaigns and Burmese military attacks on their territory, plus a lack of support or recognition. from outside from the international community, many of Myanmar’s ethnic armed organizations were initially less active than a passive observer might expect. The creation of a new coalition of 10 rebel groups demonstrates the changing stance in these minority organizations, possibly shaped by the simultaneous emergence of an exile government representing the movement. support democracy. This New insurgent coalition voiced support for government in exile on April 4.

Write last month for The Diplomat, I argue, that the factors were in place so that the Myanmar crisis evolved into a devastating and devastating conflict, followed by a large-scale humanitarian crisis. The most relevant question posed at this point should be: “Is there a way to go back to now, and how?” As in the early stages of the recent civil wars in Lebanon, Bosnia and Syria, no one seems to be able to play the role of a pacifist. During the 1990s and 2000s, Aung Sang Suu Kyi’s admirers sometimes compared her to Gandhi, Nelson Mandela and Martin Luther King. Her ability to inspire support, grab international attention, and negotiate with her opponents eventually resulted in a 10-year period of power sharing between her pro-democracy movement and the military. country team. Aung Sang Suu Kyi is currently awaiting trial by the authorities, a trial that will most likely prompt the protest movement to take stronger action.

After the March 27 bloodshed, exiled lawmakers, who support the protesters, have formed a kind of government in exile that will likely be supported by some Western nations, in protest. Military violence continued to increase. Also around this time, there was information that a shipment of grenades and ammunition blocked of the Thai police on the border with Myanmar. Some speculated that the weapon was on its way to the protest movement. Throughout March, the #springrevolution tag became popular online, a sign of how the movement is now seeing itself: as a revolution, seeking radical change. On April 2, during a further escalation, the government ordered a nationwide power cut as a means of blocking the media and further undermining what remains of the country’s free press. Power outages were accompanied by arrests of journalists and celebrities.

Myanmar’s armed forces, or Tatmadaw, are experienced, well-equipped, well-trained and seem to be well communicated. There have been a number of people who have defected from the police and military ranks since the coup, but overall these numbers are trivial. The number of fugitives could change if the protest intensified or turned into something more violent. However, the military’s cohesion so far has been maintained, as well as its determination to prevent deserteration, as can be seen in the past. shoot a police guard protester on April 2.

There are more than a dozen ethnic armed groups against the central government in Myanmar, some of which have been fighting since the late 1940s. According to some analysts, these groups common field about 100,000 fighters, compared with 350,000 Tatmadaw. The ceasefire issued by the military to these rebel groups at the end of March (so the army can focus on quenching the pro-democracy movement) has not been rejected by all of these groups, as many The group was exhausted after years of conflict and lost their lives. property damage, and the international and ASEAN communities turn a blind eye to their struggles and grievances.

The responses of neighboring countries and the international community have been mixed. China has expressed concern about attacks on Chinese-owned companies, threats of Chinese citizens, and high levels of online abuse and trolls in favor of these acts. Many believe that the anti-Myanmar movement sees China as an important supporter of the government. “Junta children” also be harassed, both online and in real life. Other regional dictatorships, such as Thailand, Laos, Cambodia and Vietnam, have not supported criticism from Malaysia, Indonesia, the Philippines and Singapore over the military’s actions in the first few weeks. first of the conflict. Overall, ASEAN has proven powerless, divided and dominated by dictatorships, as most observers know. In addition, at the end of March, The Thai military was accused of selling rice to Myanmar soldiers. On March 31, the UN special envoy to Myanmar, Christine Schraner Burgener, asked the international community to consider every option to prevent the Myanmar crisis from escalating into a critical humanitarian emergency. The UN Security Council has been divided on how to respond to the crisis.

The only practical solution to such a polarizing and divisive conflict is the intervention of an external third party trusted by both parties, or a reputable and respected individual can bring. the two sides come close together. Aung San Suu Kyi is one such charismatic and respected individual. Unfortunately, she has been distrusted by the military and is waiting for a possible trial. It is also likely that unfair accusations against her will cause more anger from the public. Is there another individual in the international community willing, able, and reliable enough to play this role? If Aung San Suu Kyi returned from prison to play a peacemaker role as Nelson Mandela did in South Africa in the early 1990s, she could push for an end to hostility and pull both sides. join in negotiations. table. However, after all that has happened since February 1, is it possible to reverse what is turning into an increasingly bitter and divisive conflict?

By briefly observing the changing role of the various actors involved – the creation of an internal exile government, supported by a coalition of ethnic rebel groups, The protesters are now armed with homemade weapons and small bomb plantations, and the increasingly fierce repression of a regime that receives external support from China and Russia – there is no reason to believe that the current crisis will alleviate or alleviate itself. course, in the near future, without significant external or individual intervention. party. In the coming months, India, Thailand, Laos, Malaysia, and other neighboring countries will increasingly inherit the burden of the increasing influx of refugees into their territories. The problem is to speculate how these states will deal with the emergence of these poor people on their borders. Worryingly, the recent Manipur state government in eastern India deny allow Myanmar civilians fled the violence to India, and initially refused to provide them with food and shelter. After more than two months of government in Myanmar, there is no basis to hope for a peaceful solution to the crisis, preventing some sort of sudden and decisive intervention from the outside.