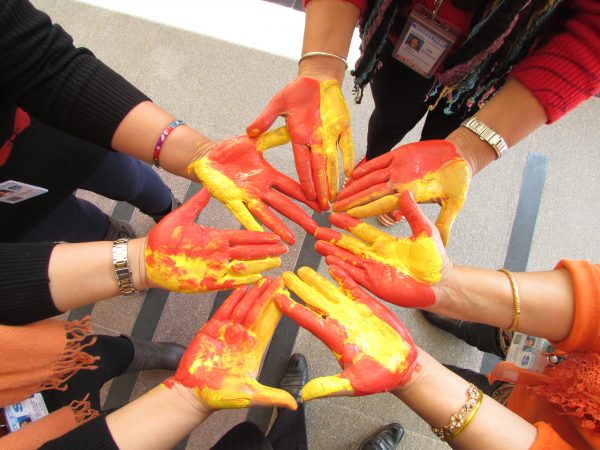 The United Nations National Group, Nepal participated in 16 Activity Days with a mural painted with strong hands aimed at ending violence against women, in 2014.

With the enactment of a new, stricter law in Nepal against the use of acid in the attacks, the culprit has now turned to hot oil. Although injuries from such attacks are typically first-degree burns compared to acid attacks (leading to third-degree burns), weaker legislation and less government support leave victims of Such attacks vulnerable. Criminals who use such methods knowing the stricter penalty lie in using acids – not oil.

After years of public opposition and activists’ efforts, the government of Nepal passed an ordinance that oversees the sale and distribution of corrosive chemicals. The 2077 Other Harmful Acids and Chemicals Ordinance (Regulation) will now require anyone to obtain a license to buy and sell those products. In addition, the buyer needs to send details to the Ministry of the Interior within one week of the purchase and the seller must keep a record of the buyer.

On September 28 of last year, Nepali President Bidya Devi Bhandari signed two decrees into law regarding the provisions of acid trading and the criminalization of perpetrators of acid attacks. The new law has been welcomed with much fanfare, and the perpetrator now faces a 20-year prison sentence. Unfortunately, however, other burn victims were excluded from the new rules.

The absence of a strict law against burn violence in Nepal has led to a skyrocketing number of such crimes.

According to Nepalese Burn Violence Survivors (BVSN), Nepali women often suffer burns due to dowry disputes and when they deny men’s progress. The Foundation reports that around 245 cases have been reported since 2010, averaging 40 cases per year.

Oli also announced that four hospitals will have a unit dedicated to acid-splash victims: Tribhuvan University Teaching Hospital, Bir Hospital, Patan Hospital and a Kirtipur-based hospital. Hospitals will treat acid attack victims free of charge, but burn survivors have to rely on their own finances – which leaves low-income victims vulnerable. .

While the victims of acid attacks are supported by the government of Nepal, oil burn survivors have nowhere to go.

National Penal Code (2017) Article 193 (1-3) prohibits (all silicon) from “deforming by the use of acids or other chemicals, biological or poisonous substances, or throwing that substance. to another person or by burning, burning, caressing the body with or applying the substance to or deforming the person’s face or any part of the body. “

“The fine collected under subsection (2) will be paid to the victim in full as compensation,” the law states.

Despite these regulations, the act of pouring hot oil on others has not stopped, as it is difficult to regulate the buying and selling of a commodity every day.

Recently a student of the school, Puja Karki, has been the victim of a hot oil attack and is not supported by the state, an activist who is begging the public for funding her dream of studying graphic design.

Longtime activist Ujjwal Bikram Thapa, who has been instrumental in changing the acid law and helping the victims, believes that leniency towards those who use hot oil to attack others must stop, and bring In fact, hospitals and medical staff often do not know how to treat such victims.

Thapa told The Diplomat, “I thank the Nepalese government for changing the acid law but unfortunately in the process other burn victims were left behind. The perpetrators received at least 10 years in prison and the government should support the victims’ treatment. “

Thapa believes that the law of tolerance about burn violence encourages criminals to exploit loopholes.

“Victims often come from low-income families and victims tend to target them. We need stricter laws for burn violence no matter what substance is used. It will not only act as a deterrent to criminal-minded people, but also energize burn survivors. “