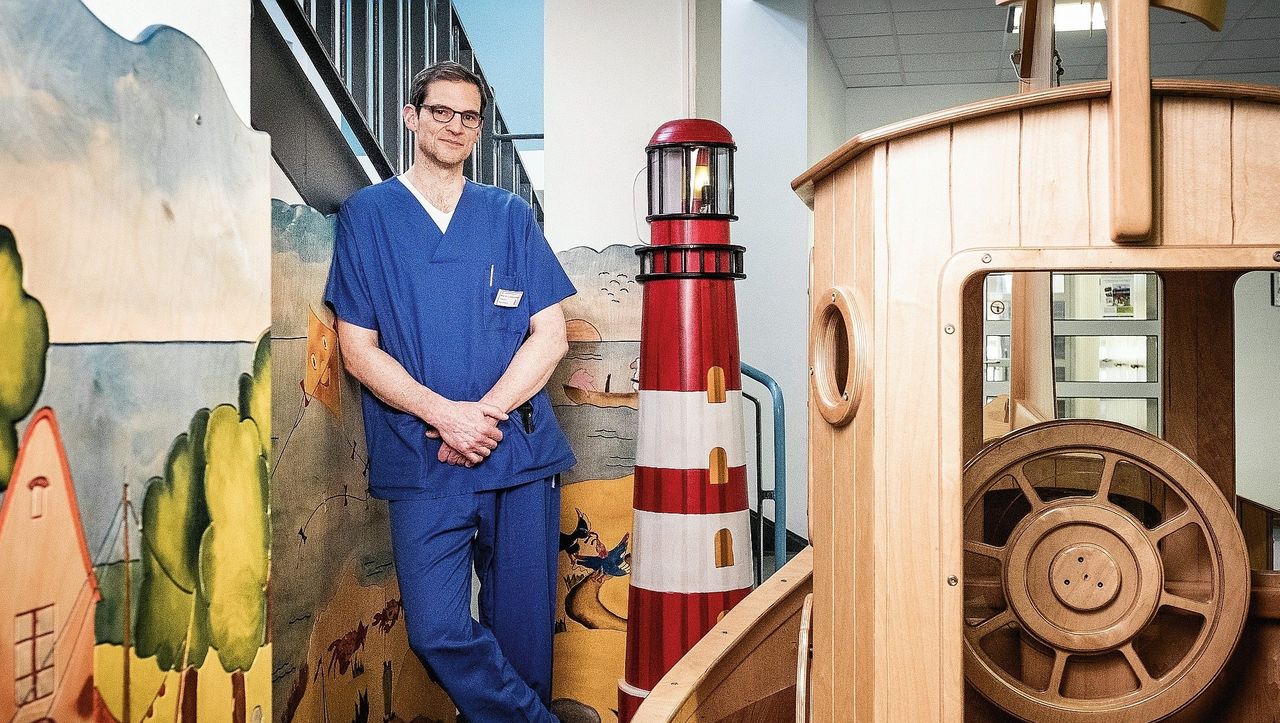 Until now, Christian Dohna-Schwake only knew a thing or two about these kids – some 5 years old, others 17 years old – transferred to the intensive care unit where he worked at the University Hospital. in Essen because of a high fever. and circulation is not stable. He also knows that starting around mid-April, their numbers will increase.

Of course, it is impossible to determine exactly who will fall ill. But one thing can be confirmed with certainty: The patient has previously been infected with SARS-CoV-2. Indeed, those who will show up in April are contracted by the coronavirus right now.


Dohna-Schwake is closely monitoring a third coronavirus outbreak that is on the rise in Germany. Around this time, the rate of illness was higher than that of the first and second wave. Lothar Wieler, head of the Robert Koch Institute, the German center for disease control, said the number was growing “very quickly”. last week. And that means more patients with the Children’s Inflammatory Syndrome for Dohna-Schwake.

To date, 19 PIMS cases have been treated in Essen, a number higher than any other German hospital. A year ago, this disease was not known by the medical community. However, it is now understood that PIMS is a rare, but particularly implicit, consequence of a coronavirus infection. “We’ve learned a lot and we’re still learning,” says Dohna-Schwake.

None of his PIMS patients died. According to him, that is partly due to luck, as some cases are quite serious. For example, a six-year-old’s condition was “definitely life threatening,” recalls Dohna-Schwake. A nearby smaller hospital initially treated the boy in October, just as the second wave of German coronavirus became inflamed.

The boy had a fever, his eyes were swollen, and a red rash all over his body. But the worst is that he has severe stomach pain. He was given antibiotics, but the treatment was to no avail. The fever won’t go away.

The doctors were confused. Eventually, however, they begin to wonder: Could this be the novel syndrome they have read in the medical journals? Doctors at Essen shared their suspicions. There is no evidence that the boy has been exposed to coronavirus, but that doesn’t necessarily make sense. “Often the infection itself goes unnoticed,” says Dohna-Schwake. Serious symptoms do not appear until the virus is gone long ago.

The patient was transferred to the University Hospital in Essen, where his condition worsened. His blood vessels dilate and more and more fluid is leaking through the vessel walls into the surrounding tissues, and his blood pressure drops. “We have to deal with drugs, with circulatory stabilization that I rarely see,” says Dohna-Schwake.

Then, the boy’s lungs also began to collect water. The boy had difficulty breathing and the oxygen saturation in the blood decreased. “We had to put him in an artificial coma in order to ventilate him,” said Dohna-Schwake. His condition only began to improve after he was given high doses of cortisone. After four or five days, doctors were able to pull their patients out of a coma.

By now, every doctor working in the pediatric special care department has heard of cases like this. Doctors now know that the syndrome is the result of a disturbed immune system response that can lead to inflammatory processes in various organs and in the blood vessels.

PIMS appears to occur in about one in every 1,000 children who have been infected with SARS-CoV-2 in Germany. Factors that determine the timing of an outbreak are unknown.

The German Society for Pediatric Infectious Diseases (DGPI) has asked all hospitals in Germany and Austria to report any diagnosed cases of PIMS to the University Hospital of Dresden.

The registration there is being maintained by two pediatricians, Reinhard Berner and Jakob Armann. Recalling its launch, Armann said, “it was about a year ago. Like the others, the DGPI has also largely turned to Zoom meetings.” The theme of the first meeting was the role of pediatricians in a pandemic.

At that time, hospitals across Germany were preparing for the scheduled patient emergency. All minor surgeries were canceled and the entire clinic was cleared for COVID-19 patient. But children’s hospitals are hardly affected. It is clear that children rarely get sick; and when they do, it’s usually not that serious. But does that mean that the pediatricians will just sit on the sidelines during a pandemic?

Children, DGPI quickly agreed, needed special attention in any kind of epidemic. Even if they don’t show any symptoms, they can still be carriers. It is important to understand why viruses are largely forgiving children and when there are exceptions to this rule.

They were determined to follow the situation as closely as possible. Since the number of COVID-19 cases in children is so low, all observations need to be concentrated. “The task of creating such a registry belongs to us,” Armann said.

When the first reports of PIMS cases came from the UK and the US in April, it became clear that Dresden doctors had established a registry to deal with exactly this kind of phenomenon. It is clear that children can also become seriously ill from the action of the coronavirus, although the symptoms look a lot different from COVID-19.

At that time, PIMS still had no name. It has been described as a new type of inflammation, particularly similar to one known as Kawasaki syndrome, first identified about 50 years ago. It mainly affects babies and preschool children and is more common in Japan.

Through more than a year of clinical experience with SARS-CoV-2, striking differences have now emerged between PIMS and Kawasaki syndrome. One significant difference is the age group most often affected. Although young children can also get PIMS, most patients much older, usually 7 to 10 years old, sometimes children 13, 16 or even 20 years old are hospitalized with PIMS.

Symptoms of PIMS and Kawasaki syndrome are also different. “The remarkable thing is how often the stomach and intestines are linked to PIMS,” said Dohna-Schwake, Special Care Physician at Essen. I was afraid of appendicitis and opened my abdomen, I found nothing to be operated on.

Doctors just opened the abdomen and found that there was nothing to surgery.

Despite all the differences, what both syndromes have in common is that they stem from an overreaction of the immune system. “What makes PIMS so fascinating is we know what causes it,” Armann said. This also allows some conclusions to be drawn for classical Kawasaki syndrome: Epidemiological data suggest that viral infection may also be the cause of the disease.

Clue: Parallel to an increase in PIMS cases, the number of Kawasaki cases has decreased. Doctors believe that the reason for that drop is due to measures aimed at preventing coronavirus: The exclusion from society has ensured that there is less than normal spread of the pathogens that cause the flu and cold. Because such viruses are hardly contagious anymore, secondary complications they may have are not frequent.

A total of 238 PIMS cases are currently recorded in the Dresden registry. Occurrences followed the course of the COVID-19 curve, albeit with a delay of several weeks. The medical record reflects the different progression of the disease, depending on which organs are affected. In every fourth case, the inflammation spreads to the nervous system, which can lead to seizures. In each fifth case, the kidney or liver is affected.

Of the cases reported in Dresden, 59% had to go to intensive care, mainly because the patient’s circulation could no longer stabilize without medical assistance. No children died.

Meanwhile, doctors are reporting disturbing news from the United States. They argue that PIMS is getting more and more aggressive there without any explanation as to why that might have happened. The US Centers for Disease Control (CDC) has reported 33 deaths. “I exchange information with a colleague in New York,” said Dohna-Schwake, “He told me that almost all PIMS patients there today need special care.” Six months ago, the rate was still only 40 percent.

Fortunately, such a trend is yet to develop in Germany. To date, there is no evidence that new variants of the SARS-CoV-2 virus will aggravate the progression of PIMS.

According to reports from German hospitals, PIMS can be treated. “The standard treatment for Kawasaki syndrome is working,” Armann said. The rebellious immune system can be soothed with the help of cortisone. Immunoglobulins obtained from donor plasma are also effective. It is not clear why a mixture of nonspecific antibodies has the ability to modulate the body’s defenses. But Dohna-Schwake confirmed: “It’s very impressive. Immunoglobulin, high dose of cortisone and after 48 hours, the nightmare is over.”

Dresden’s PIMS registry found that nearly half of all discharged patients were healthy. However, in almost a tenth of the cases, children were left with long-term problems. Fifteen children and adolescents suffer from lasting heart damage and will have to be monitored by doctors for a long time.

“The often very sophisticated long-term spectrum of effects is very broad and still not fully understood,” said Dohna-Schwake. For example, two of the girls he treated in Essen complained of their menstrual problems after they were discharged from the hospital. The six-year-old boy he was discharged from the hospital last fall is still suffering from muscle weakness today.

After he was released from the university hospital in Essen, he was sent to a rehabilitation hospital for the first time, where he had to learn to walk. The strength in his arm hasn’t completely returned yet – a striking proof that it would be mistaken to believe that coronavirus is not particularly dangerous for children.