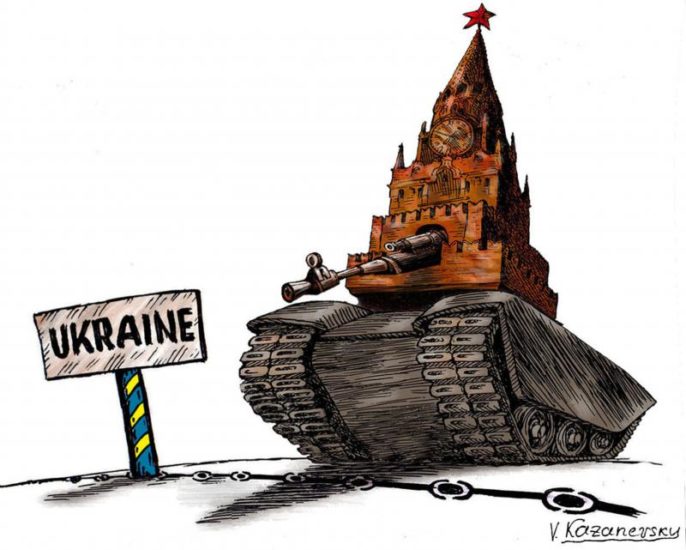 The war between Russia and Ukraine in the Donbass region of eastern Ukraine never ended. To our great regret, the West has, over the years, pretended to forget the war – giving Russian President Vladimir Putin a good reason to feel unpunished.

Undoubtedly, this sense of impunity is one of the reasons the situation in eastern Ukraine has worsened dangerously at a time when Putin’s growing popularity in Russia and the internal crisis. Increasingly, the ministry may prompt him to take active foreign policy steps to use this. cemented his own popularity, as he did in 2014 by annexing Ukraine’s Crimea. Hence, I fear that Putin is preparing to do the same with Donbass as he did with Crimea seven years ago: more steamy by merging directly or by recognizing the so-called “independence” of the so-called DPR and LPR , as you did before with Transnistria, Abkhazia, or South Ossetia.

Why is Putin concentrating his army on the Ukrainian border?

The Kremlin does not deny a strong military presence but ensures that it is not a threat. However, it insists that his army remains as long as it sees fit. Furthermore, President Vladimir Putin in turn accused Ukraine of being the source of “dangerous provocations.” The Kremlin says Kyiv allegedly refused to fulfill its obligations under the Minsk agreements to resolve the Donbass issue.

Moscow is stepped up the movement of troops to Crimea and the Russia-Ukraine border near territories controlled by pro-Russian separatists.

President Volodymyr Zelensky said 20 Ukrainian soldiers were killed and 57 wounded since the beginning of the year, while Kyiv reported the deaths of 50 soldiers by 2020.

The Kremlin’s belligerent rhetoric is escalating and the situation is raising concerns: the volatile international security balance could collapse.

Will Russia be content with the “muscle flexing” again or is preparing for a new hostile move the way it did nearly seven years after annexing Crimea and the outbreak of conflict in the east? Ukraine?

“Russian mother, bring Donbass home.” This call of the Kremlin-backed director of Russia Today TV channel, controversial propagandist Margarita Simonyan, which became the main event of the Russian Donbass forum, took place on January 28 in occupied eastern Ukraine and marked the beginning of a new escalation of the Putin regime’s seven-year war against Ukraine.

After a record ceasefire in the second half of 2020 during the war in eastern Ukraine. Concurrently with the forum, the number of clashes across all communications between pro-Russian forces and the Ukrainian army has increased since January. Although both sides have blamed each other for the escalation of the conflict, the connection between the two events is striking.

Moreover, although Putin’s press secretary, Dmitry Peskov said that the calls for the annexation of Donbass Ukraine made in the forum did not reflect the official views of the Kremlin, there was no doubt that Margarita Simonyan, who has long become Putin’s own “Goebbels”. , will never fail to make out loud statements without the consent of those in charge of the Regulatory Authority. And this meant that she had been instructed from the outset to call out for the Donbass “takeover”. Subsequent events only confirm this release. Dmitry Kozak, who oversees “Ukraine affairs” in the Presidential Palace, said that Russia may be forced to protect citizens of Donbass, citing the protection of the people, where more than 600,000 Russian passports have been issued.

It would be a great propaganda trick for Putin to announce Donbass’s annexation (or recognition of independence) in his April 21 presidential speech to the Federal Parliament, almost the same day as the annual anniversary of Crimea’s annexation in 2014. The Kremlin leader’s intentions could be confirmed indirectly by the Federal Council meeting in the next few days after the speech, which may make it possible. the Donbass merger was legally disguised. The “successful” annexation of Donbas will no doubt be used to target the regime’s nuclear electoral district in preparation for the September 2021 parliamentary elections.

Russian military mobility and the risk of escalation could also be used in parallel actions with the annexation of Donbass, as a lever in negotiations with the West after annexing Donbass.

I’m sure Putin hopes that the only response from the Western collective will be deep habitual concerns. Hope this time he is about to be disappointed.

This article was written by a member of the Voxeurop community. It has been reviewed by the Editors, but does not necessarily reflect the views of Voxeurop.