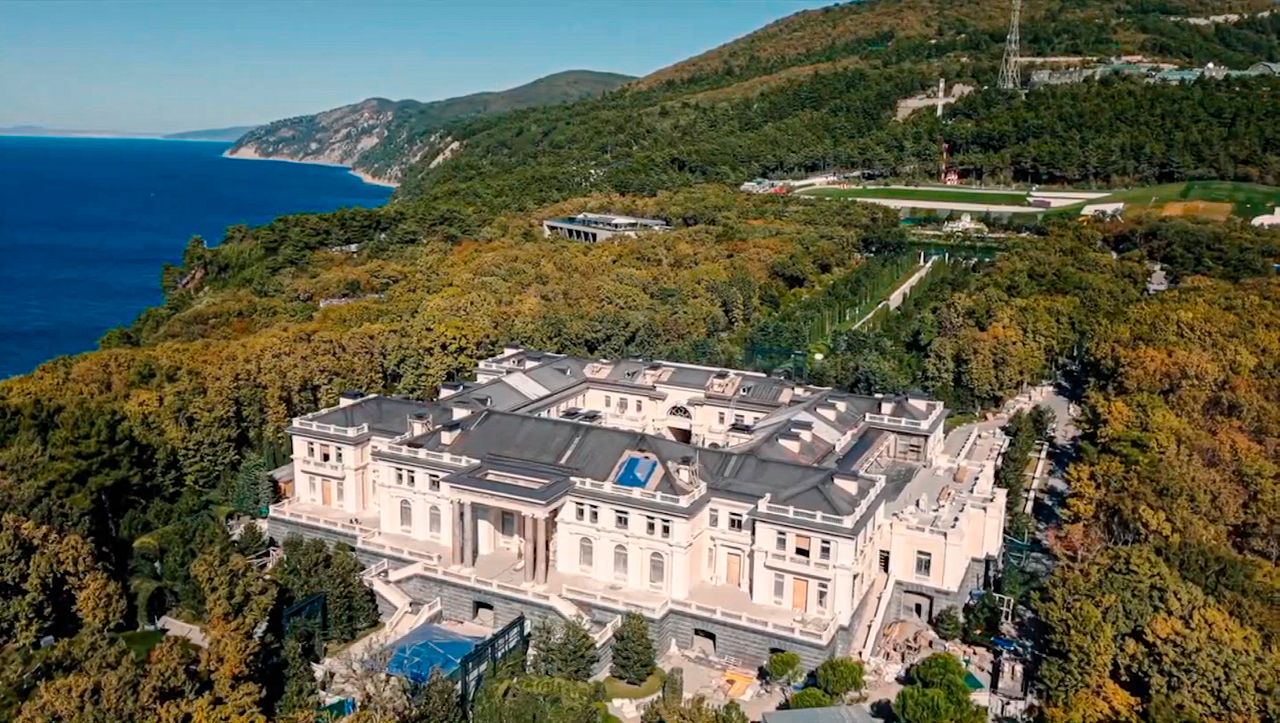 Lanfranco Cirillo is sitting in front of his computer in shorts and a polo shirt. It’s hot in Dubai and he’s about to drive out to the seaside. The architect, who has spent decades providing Moscow’s super rich with villas and Italian-inspired designs, left cold Russia long ago. He has even closed his architecture firm there.

But people in Russia haven’t forgotten Cirillo’s work. That’s in part thanks to opposition politician Alexei Navalny and his YouTube film “A Palace for Putin.” The subject of the film is a luxurious mansion on the Black Sea coast that was built, Navalny claims, by members of Putin’s circle of friends specifically for the Russian president. The film has been viewed a spectacular 113 million times, and a quarter of all Russians have seen it, according to surveys. The architect of the palace? Lanfranco Cirillo.

“Architecturally speaking, it’s not my biggest or best work. It’s just beautiful neo-classical – that’s what they asked for.”

“Rich” is the word Cirillo himself uses to describe the project. “Architecturally speaking, it’s not the biggest or best project I made. It’s nice neoclassicism – that’s what was asked for. As an architect, I build what the customer wants.” It sounds almost as though he wants to distance himself, to vindicate himself for the bombastic style. “But aesthetically speaking, it is very correct considering historical proportions. It is not kitsch,” he says. “It’s not overdone, but naturally it is rich, as it was supposed to be. And we used fantastic materials. I was proud of my job. It’s very good ‘Made in Italy.’”

Architect Cirillo in Moscow in 2015

Rich is also the term many Russians would use to describe the decor. There’s a pool disco, a shisha bar with a pole for pole dancing, a home theater – all of which appear in Navalny’s film, meticulously reconstructed on the computer according to the furnishing plans he obtained. At the bottom right of the plans is the name of Cirillo’s architectural firm at the time: Stroygazkomplekt.

Speaking on Zoom from Dubai, he says that he has of course seen Navalny’s film. He also confirms that the plans for the furnishing of the palace appear to be authentic. He says the 3-D reconstruction is also broadly correct, although not in every detail. He claims that although he did plan a shisha bar, the pole dancing pole in the film was made up.

Neither for Putin nor Another Individual?

Otherwise, Cirillo thinks pretty much everything else in the film is misleading. He claims the Black Sea property is neither spectacular nor was it built for Putin or any other individual for that matter. Cirillo claims he can’t understand all the fuss. He says Russia has bigger problems than a construction project that is already 12 years old.

One can try to tell the story of the palace in Gelendzhik in Cirillo’s words instead of Navalny’s, but the narrative remains incomplete, with a lot of ambiguities. In his friendly, light-hearted manner, Cirillo leaves some questions unanswered.

“At the time, there were few foreigners who could speak Russian and could complete ready-made projects. We weren’t building homes, we were selling a lifestyle.”

He says the story begins back in 2007 or 2008. Cirillo was doing well as an architect at the time. He had come to Moscow in the early 1990s as a representative of the Mascagni furniture company and established himself there as a kind of lifestyle teacher to the nouveau riche. He built dachas and villas for people like the head of the oil company Lukoil. “At the time, there were not many foreigners who could speak Russian and make turn-key products. We weren’t just building a home, we were selling a lifestyle. The homes came finished, right down to the wine glasses and Italian Sassicaia and Masseto wine. All you had to do was bring your clothes,” Cirillo says proudly.

He proudly says that he counts 44 billionaires on the Russian Forbes list among his clients, and that he has built in St. Petersburg, London, Paris and on the coasts of various seas. Most of his work is on Rublyovka, the extravagant residential area in western Moscow.

He says he got crazy assignments because “in Russia, you get paid for being crazy” – a golden bathroom for an airplane, a completely remote-controlled wardrobe, bathrooms made of semi-precious stones or mother-of-pearl, furnishings for 100-meter yachts.

He employed 140 architects and engineers in his office, receiving clients by word of mouth with no internet advertising necessary. “I was overbooked as it was,” he says.

Oddly, though, outside of his super-rich clientele, Cirillo’s name wasn’t well known in Moscow for a long time. Russian architects hardly knew him, and he was also rarely seen in the Italian expat community.

“In my eyes, Cirillo is not an architect, but a dealer of expensive Italian furniture,” says prominent Russian architectural critic Grigory Rezvin. “That’s outside of my expertise.”

The name Cirillo was first mentioned publicly in 2010, and it was already in connection with the mysterious Black Sea estate. An informed businessman wrote in an open letter to then-President Dmitry Medvedev that a palace was being built for Putin near Gelendzhik with corrupt funds. The man described how he and other businessmen had been fleeced for the project. He estimated the total cost at a billion dollars and said the interior design had been personally approved by Putin and executed by Cirillo.

A Place to Receive Guests – Not a Residence

But who was Stroygazconsulting building the property for?

Cirillo doesn’t say. But he points to the layout of the building to argue that it wasn’t intended as a private residence. “It’s not a residence – it’s a place where you can receive guests. And not just one, but 20 to 30. There is no family area in the estate at all. You don’t build a shisha bar for a residence.”

“Every door in the country is open to Putin. If he wants to go to any villa, all he has to do is make a phone call.”

The architect says he was commissioned to build an estate for receptions, an exclusive place where business meetings could be held in a pleasant atmosphere – just as big companies need. Back in 2008, money was still everywhere in Russia. “It was a different time.”

“And why should Putin own such a big place for himself, anyway? Every door in the country is open to Putin. If he wants to go to any villa, all he has to do is make a phone call,” says Cirillo.

But oddly enough, a no-fly zone has been set up around the building. The FSO, the presidential security service, guard the estate together with the secret service agency FSB. Even vessels are prohibited in the coastal waters in front of the villa.

It is also strange that some subcontractors described their construction work as contributions to a residence of the presidential administration.

And if Putin is wrongly suspected, why has the person who originally issued the contract not spoken out to spare the Kremlin an unnecessary headache? Only recently did Putin’s former judo partner, Arkady Rotenberg, go on record recently as saying he was the current owner, claiming he bought the project “a few years ago” to develop an “apartment hotel” out of it. But he didn’t show any documents.

Cirillo says he visited the property 20 to 30 times, even though, as he claims, he wasn’t involved in the construction process. He says he was just responsible for the design and later for the decor and furnishings and that he last visited the site in the spring of 2014.

Cirillo says he had nothing to do with the 16-story-deep shaft and the 100-meter long tunnel that leads from the palace directly to the water. “Back when I was involved, there was just a road leading to the beach,” he says. He did, though, he says, work on the park, including the Italian landscaping, the Orangery, the guest house and the bridge leading to it. The amphitheater in the park was also his idea, he says. Silvio Berlusconi also has one at his private villa in Sardinia. Putin visited him there once, which led to speculation that the amphitheater had been copied from Berlusconi. Cirillo doesn’t say one way or the other. Berlusconi, he says, is a neighbor – and, incidentally, “a fantastic guy with a fantastic house.”

Navalny’s team also found Cirillo’s name in the Gelendzhik property register. It states that he, too, was the owner of a sea-front property for a while. Navalny says the house was a reward. After all, it’s “advantageous to keep Putin’s secrets.” Cirillo finds the accusation ridiculous. “I own three villas in Porto Cervo in Sardinia. I’m not a poor man. I’m not going to engage in wrongdoing for a few hundred thousand dollars,” he says.

In 2014, Cirillo was granted Russian citizenship by direct decree from President Putin himself – an unusual honor. Cirillo says this has to do with his involvement in Russia as a whole and not with individual construction projects. “I am not Putin’s architect. It would be nice, but it’s not true. But yes, I had the opportunity to shake his hand.”

For a time, it looked as though Cirillo might graduate from being a designer of luxury villas to state architect. In the architectural competition for a new parliament building, his project made it to the short list. But the parliament was never built, and Cirillo says he’s happy that’s the case because otherwise, he would still be working on it now. He ceased his activities in Russia in 2015. His adult daughter had cancer and he wanted to spend time with her. He says he closed his office in Moscow a long time ago. His daughter died and he now wants to do good in her name and dedicate himself to environmental causes. He is currently trying to get the Pope to the North Pole to draw attention to the destruction of the Arctic.

In a slightly absurd twist, the palace in Gelendzhik is currently further from completion than ever before. After it became infested with mold, the building had to be stripped down to the concrete walls, and the pricey Italian furniture and materials were removed. What Navalny shows in his film does correspond to the furnishing plans, but it no longer reflects the current state. The whole project seems a bit like Berlin’s airport debacle, which saw the facility first open nearly a decade after originally planned. It simply can’t make it to the finish line.

Is the mold problem due to a design error? “I’m not an engineer, I’m an architect,” Cirillo says. “But if you heat up a house and never open the windows, then of course a lot can go wrong.”