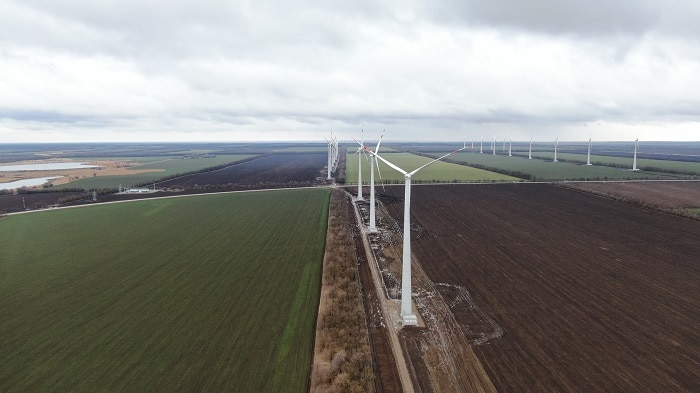 The Delo Group, Russia’s largest logistics and transportation group, and Atomenergoprom, a company of the state-owned Rosatom group that consolidates all Russian civilian assets, signed on April 13. agreement on joint actions to promote the transition of logistics terminals to low carbon energy sources.

The agreement was signed on the sidelines of the TransRussia-2021 International Exhibition by Delo Management Company CEO Igor Yakovenko and Rosatom Business Development Manager Ekaterina Lyakhova.

One of the first steps this agreement took was to provide wind-generated electricity to the largest ports in Russia’s Black Sea-Azov region: NUTEP Container Terminal and KSK Grain Terminal in Novorossiysk – both are part of DeloPorts, a group’s warehouse assets).

Atomenergopromsbyt, of NovaWind, Rosatom’s wind power division, is acting as a partner on the project.

According to the agreement, as of January 1, 2022, the terminals will be supplied entirely by wind power, Rosatom said.

KSK and NUTEP became the first major port infrastructure in Russia to announce a switch to renewable energy.

“Rosatom is continuously implementing a low carbon energy production strategy based on nuclear and wind energy,” Lyakhova said. “Currently, more and more companies are choosing the path of sustainable business development. In many ways, it becomes the key to long-term commercial competitiveness and success. And I hope that today’s deal is just the first step towards transforming Russian logistics businesses into low-carbon sources, ”she added.

NUTEP’s annual handling capacity is 700,000 units equivalent to twenty feet (TEU), the terminal’s container revenue by 2020 will reach 487,000 TEUs. The share of NUTEP in the container revenue of the Azov-Black Sea basin is 61%, in Russia – 9%. The terminal’s customers include the largest international routes. The processing capacity of the biogas plant is 6 million tons / year, increasing to 7 million tons after completing the construction in 2021; By 2020, the station will process more than 5.1 million tons of grain. The share of KSK in Russia’s grain exports by 2020 is 12%.

The “green port” project will allow the use of electricity generated from low carbon energy sources (RES) to facilitate exports from Russia with minimal CO2 emissions, thus affecting reduction of NUTEP and KSK estimates in reporting of indirect greenhouse gas emissions and other indirect carbon emissions for their customers. Depending on the method adopted by the European Union, the indices could reduce the “carbon tax” on exports to the EU for Russian exporters.