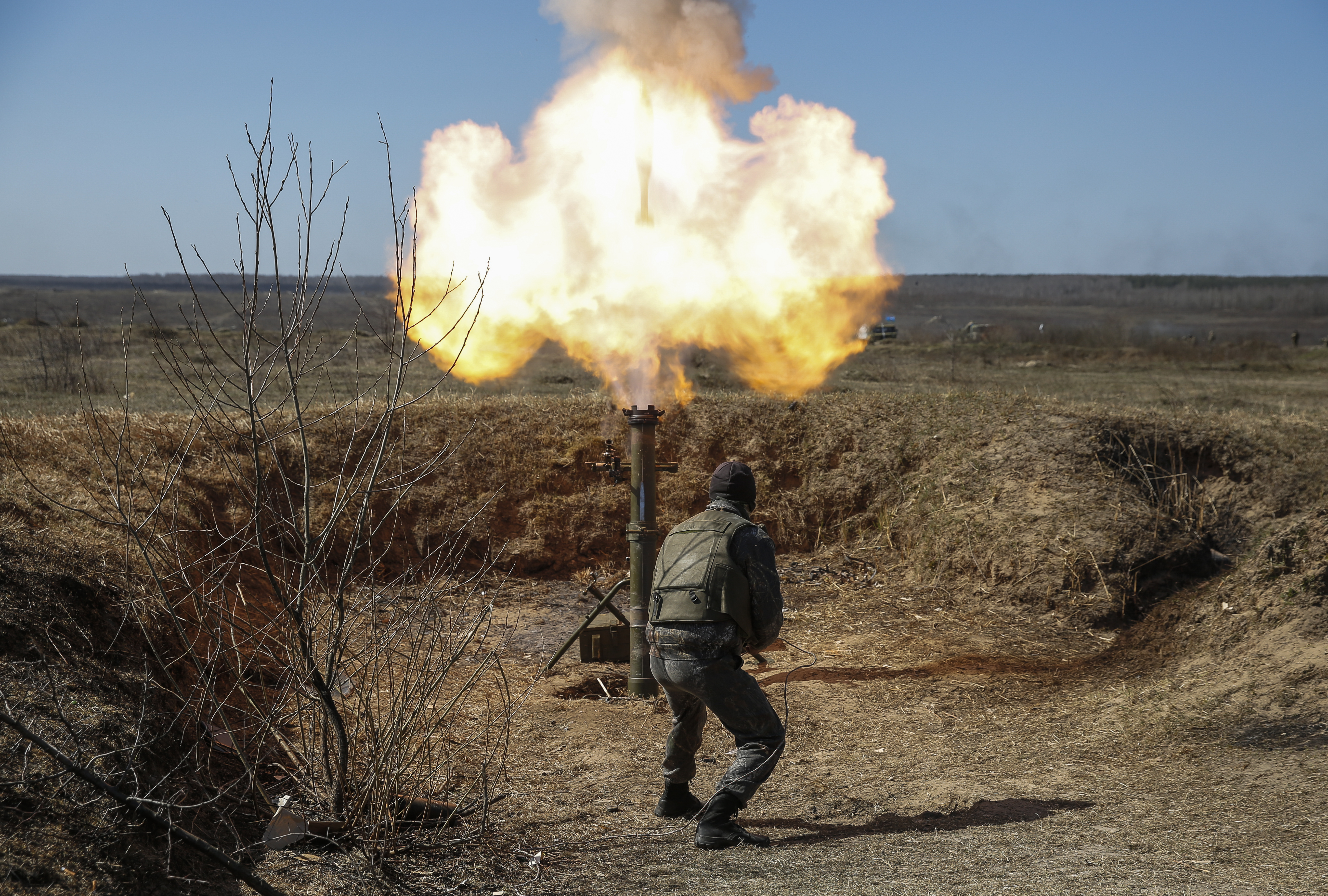 Since mid-March, Russia and Ukraine have both concentrated their armies along the border of Russia’s annexed Crimea and the conflict zone in the Donbass region of eastern Ukraine. The intentions of the parties are not clear, but it is suspicious that Russia is preparing to invade Ukraine.

The Kremlin did not give any details about the units involved, but did not attempt to conceal their movements as multiple sources reported their maneuvers along the border.

Some suggested that the Russian force building up to 16 combat battalions, possibly up to 14,000 soldiers. Ukraine’s Presidential Office Volodymyr Zelensky gave a much higher estimate with about 40,000 Russian troops on the eastern border and about 40,000 in Crimea. Ukraine is believed to have 90,000 of its own forces deployed on the side of their border.

Both Kyiv and Moscow are also conducting major military exercises, and each side is staring at each other.

After annexing Crimea in 2014, Russia began to support an uprising of pro-Russian separatists in the Donbass region. Today, a large part of it remains under the control of separatists, who continue to fight the Ukrainian Army. More than 13,000 people have been killed there since the war started seven years ago.

Whether the current military build-up is purely spying or preparing for war is still unclear, but it looks increasingly dangerous as events continue to unfold amid mutual accusations, regularly going back and forth between artillery and sniper barges along the 500 km long “communication line”.

The last time these two regular armies took on each other was in That Ilovaisk battle begins August 7, 2014, when the Ukrainian army and paramilitary groups attempt to capture the town of Ilovaisk from pro-Russian rebels affiliated with the self-proclaimed Donetsk People’s Republic and Force units. Russian armed forces.

Although Ukrainian forces could enter the town on 18 August, they were besieged on 26 August by Russian forces that crossed the border to join the battle. After days of siege, the parties came to an agreement to allow the Ukrainian forces to withdraw from the city through a humanitarian corridor. It was not honored by the Russian side and many Ukrainian soldiers were killed trying to escape.

According to Viktor Muzhenko, then the commander-in-chief of Ukraine, the outcome of the battle was the result of Russian military involvement, along with the inadequacy of the Ukrainian commanders in planning the withdrawal.

With little leverage after retreat, Ukraine was forced to participate in the so-called Minsk Process, a reference to the peace negotiations that followed in the Belarusian capital. In Minsk, in-depth diplomatic negotiations involved two aspects – OCSE chaired the Tripartite Liaison group and Normandy Format. Both are only seeking to localize and ease the tension for further armed confrontation, but they cannot create the necessary conditions for a lasting and ‘just’ peace.

This does not prevent the Minsk Agreements from becoming internationally accepted and is often seen as the only approach to dealing with the Donbass conflict. However, this situation has been reinforced by Resolution 2202. The warring factions of the United Nations Security Council in 2015 are completely incapable of finding a general explanation of their obligations under the agreement. , which ended the conflict a while ago.

Despite the apparent commitment of Ukraine’s international partners and mediators to finding a solution under the Minsk Agreement, the negotiations paused amid mutual accusations and gestures.

The The problems often cited for the flaws of the Minsk Agreements are their opaque priority for measures and no binding deadlines and consequences in the event of failure, both. These two things inherently contribute to their non-binding.

The main problem, however, is that the agreements have been designed to freeze conflict and allow Russia to maintain effective control over large parts of the Donbass as a central buffer in the security strategy. overall of this country. The Donbass would become the same lands as the federation remained within Ukraine, but function effectively as a Russian military and political defense agency capable of stopping any major geopolitical or national move. of Ukraine. Most importantly, the region the Kremlin wants will have considerable independence to manage its own internal affairs, plus a full amnesty for the rebels.

Ukraine gets tired of Russia using conflict zones frozen in other parts of the former Soviet space to gain knowledge, local influence, and promote beneficial separatism. for the Kremlin. By bringing the war to an end on their terms under the Minsk Agreement, Moscow would halt or slow down Ukraine’s Western integration and allow the Kremlin to establish a forward presence for the armed forces. page.

As Ukraine was slowly gaining military strength, it made it clear that the current Minsk agreement was unacceptable. As a result, Russia has now sent troops to Ukraine’s border to adhere to the terms resolutely.

Kyiv is in no hurry to denounce the Minsk Agreement out of concern that it could begin a process of loosening the sanctions imposed on Russia by the West. Ukraine wants sanctions to continue and become more widespread and more difficult for Russia – possibly including the Russian-financed Nord Stream II gas pipeline to the EU, if it becomes in fact, it will cost Ukraine about 2% of GDP. .

When it comes to this particular project, the West is divided and Russia is looking to exploit deep divisions within the transatlantic alliance. The present tensions on Ukraine’s eastern border should be examined through the prism of this move.

There is a sign of hope in July 2020 when Negotiators Ukraine, Russia and the OSCE have reached a complete cease-fire. Major skirmishes ended, but sporadic clashes began earlier this year, including the killing of civilians, Ukrainian soldiers and separatist forces.

Within a few weeks of the first shot in January, armies of both sides had moved back to their pre-ceasefire position and effectively ended the small demilitarized zone that had separated them and returned. re-engage in mutual attacks.

Ukraine says 26 of its soldiers have been killed so far, compared with 50 in 2020. The separatists say more than 20 of their soldiers have also died this year. Who started the latest outbreak is still unclear, although each side blames the other.

This situation highlights the weaknesses of the Minsk Process. As international leaders, including the EU, urged the parties to adhere to the Minsk Agreements, it is not clear whose version they are referring to. The Western-mediated Minsk Agreements are unclear and Russia’s interpretation is unacceptable to Ukraine.

The situation requires a new approach. The Russians are using their army to increase its leverage, just as they did at Ilovaisk and at the Battle of Debaltseve (where a mixed force of Russian regulars, special forces and separatists besieged and crushed the Ukrainian Armed Forces in the last major fighting of the war in February 2015).

Ukraine should be advised to avoid any provocations, but this may not be easily achieved nowadays when the military, including the paramilitary forces, is actively deployed. on both sides.

As for the current standoff and in general, the West and Ukraine have to argue that Russia’s decision causes border tensions in purpose beyond a short-term confrontation. The Russians will not leave questions about Ukraine because the border passes through the agricultural center of Russia, including major population centers and transportation networks. Moreover, in 2014, when Russia illegally annexed CrimeaUkraine has closed a nearby 400 km canal that Crimea depends on for water.

At the same time, the West cannot assume that if Russia is allowed to take back parts of Ukraine, it will stop there. Russia occupies a stronger position than Kyiv, which is still corrupt, poorly reformed and economically weak. However, Russia is in a much weaker position than the West. Even with the current military, the Kremlin is incapable of building a substantial conventional force against NATO, but has the largest nuclear arsenal in the world.

Any new war will be the most regrettable as it will lead to another great crisis. Therefore, the West should urge both sides to abide by the Minsk Protocols to immediately cease fire and move troops to a safe distance. The crisis should be seen as the strongest sign of the need to admit that the Minsk Process has been broken and that confrontations like the current one could come at any time and could be harder to control. Future.

The next step for the West is to initiate a new comprehensive treaty to address regional and uncertainties priority steps and measures, binding obligations, deadlines and consequences of non-performance. Doing so will not be easy and requires compromise from all sides.

Share
Facebook
Twitter
Pinterest
WhatsApp
Previous articleCovid: source, from April 26 an intensified yellow color, outdoor activity is acceptable – Politics
Next articleThe examiner of the British Tailor Ong is completely inferior when the candidate is proud to show off their ‘pompous’ skirt