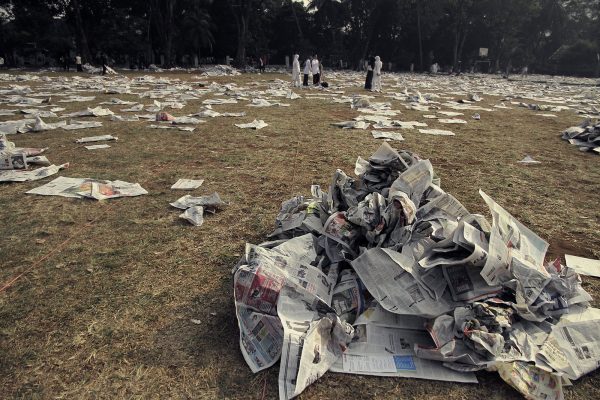 Southeast Asian governments have used the COVID-19 pandemic as an excuse to impose tight controls on the media and reinforce obstacles to free flow of information, a new report by the Reporters Without Borders (RSF) monitoring group.

This year’s World Press Freedom Index, released by the RSF on Tuesday, shows the extent to which the pandemic has resulted in increased repression and attacks of freelance journalists and press worldwide.

According to the report, authoritarian states have perfected their methods of control, while many democracies nominally introduced a series of restrictions in the name of public health. As Christian Mihr, CEO of RSF Germany, Christian, take it to Deutsche Welle, “The pandemic coronavirus has strengthened and strengthened the trends of repression around the world.”

According to the RSF index, which assesses the freedom of the press in 180 countries and territories every year, the press is currently severely hindered in 73 countries and restricted in 59 other countries, accounting for 73%. number of countries assessed. By 2020, only 12 out of 180 countries – or 7% – can claim to provide an environment conducive to journalism.

Southeast Asia reflects this broader global trend, with governments in the region having virtually no exception using COVID-19 as a reason to impose oppressive laws and narrow the scope of speech. allowed.

The gloomy regional tone was set by Vietnam, ranked 175th in terms of press freedom, just above Djibouti, China, Turkmenistan, North Korea and Eritrea. As well as preventing the COVID-19 infection from shocking the world, the ruling Communist Party of Vietnam also intensified its suppression of dissent during its five-year congress in January 2021.

This involved a protracted campaign of arrests of dissident bloggers and independent journalists, including some members of the Vietnam Association of Independent Journalists, three of them. was sentenced in January with extended prison sentences.

Malaysia experienced the strongest decline of any Southeast Asian region in 2020, falling 18 places from 101st to 119th and, in the RSF terms, “demonstrates the desire to have absolute control. believe”. In March 2021, a year after leaving to power through behind-the-scenes schemes, Prime Minister Muhyiddin Yassin’s government passed the so-called “anti-fake news”. made it an offense publish or reproduce any “wholly or partially false” information regarding COVID-19 or emergency declared in January to combat pandemic.

Its sliding table was also hastened by unfounded investigation of journalists Al Jazeera through a documentary about the country’s treatment of migrant workers during the pandemic, and several cases against the Malaysian news pioneer news agency, Malaysiakini, including one found guilty of contempt of court and is heavily penalized for comments left by readers on the site.

The Malaysian government’s actions are reflected in the adoption of abusive laws and ordinances by other states that criminalize criticism of governments’ responses to COVID-19, or in other words Another is to prohibit the publication of “fake news” of “false” information related to a pandemic.

In Thailand, the government of Prime Minister Prayut Chan-o-cha issued a decree by March 2020, spreading “false or potentially frightening” information to the public will result in up to 5 years in prison and allow authorities to “correct” any published information. Come on.

A similar situation also happened in Indonesia (No. 113), where President Joko Widodo’s government not only banned journalists from publishing “false information” related to COVID-19, but also any ” information hostile to the president or the government ”.

In Cambodia, the government of the long-ruling Prime Minister Hun Sen has intensified its years-long repression of civil society and the independent press, equip yourself with new powers to censor the media, block news websites, and arrest journalists and civilians criticizing its COVID-19 attempt.

Meanwhile, in the Philippines, President Rodrigo Duterte, who used to be warn journalists, “You are not exempt from assassination if you are a bitch,” continues to wage war against the media critical of his administration’s policies, especially the “war on drugs. “Violence.

In May, the government refuse to extend the franchise of the largest television station in the country, ABS-CBN, for making important coverage of Duterte and his government. Meanwhile Maria Ressa, editor of the news website Rappler, continues to be the subject of what the RSF calls a “grotesque judicial harassment campaign” that includes a series of criminal charges, “all equally distant ”.

Myanmar, ranked 140th, is likely to drop to the bottom of next year’s rankings, following a February 1 coup that, in the words of the RSF, “put Myanmar’s journalists back ten years.” After rising 20 places in the World Press Freedom Index from 2013 to 2017, an upward trajectory reflects its partial emergence from decades of direct military dictatorship, The country’s journalists were once again forced underground amid a systematic campaign of violence, arrest and censorship.

One of the bright spots in Southeast Asia is Timor-Leste, which ranks 71st highest in the region, up seven places from last year. As the RSF notes, “No journalists have been jailed for their involvement in East Timo since this country of just 1.2 million people gained independence in 2002”.

This year’s World Press Freedom Index shows that in Southeast Asia, the independent press, which the RSF describes as “the best vaccine against the misinformation virus,” has never been too late. necessary, but never so lacking.