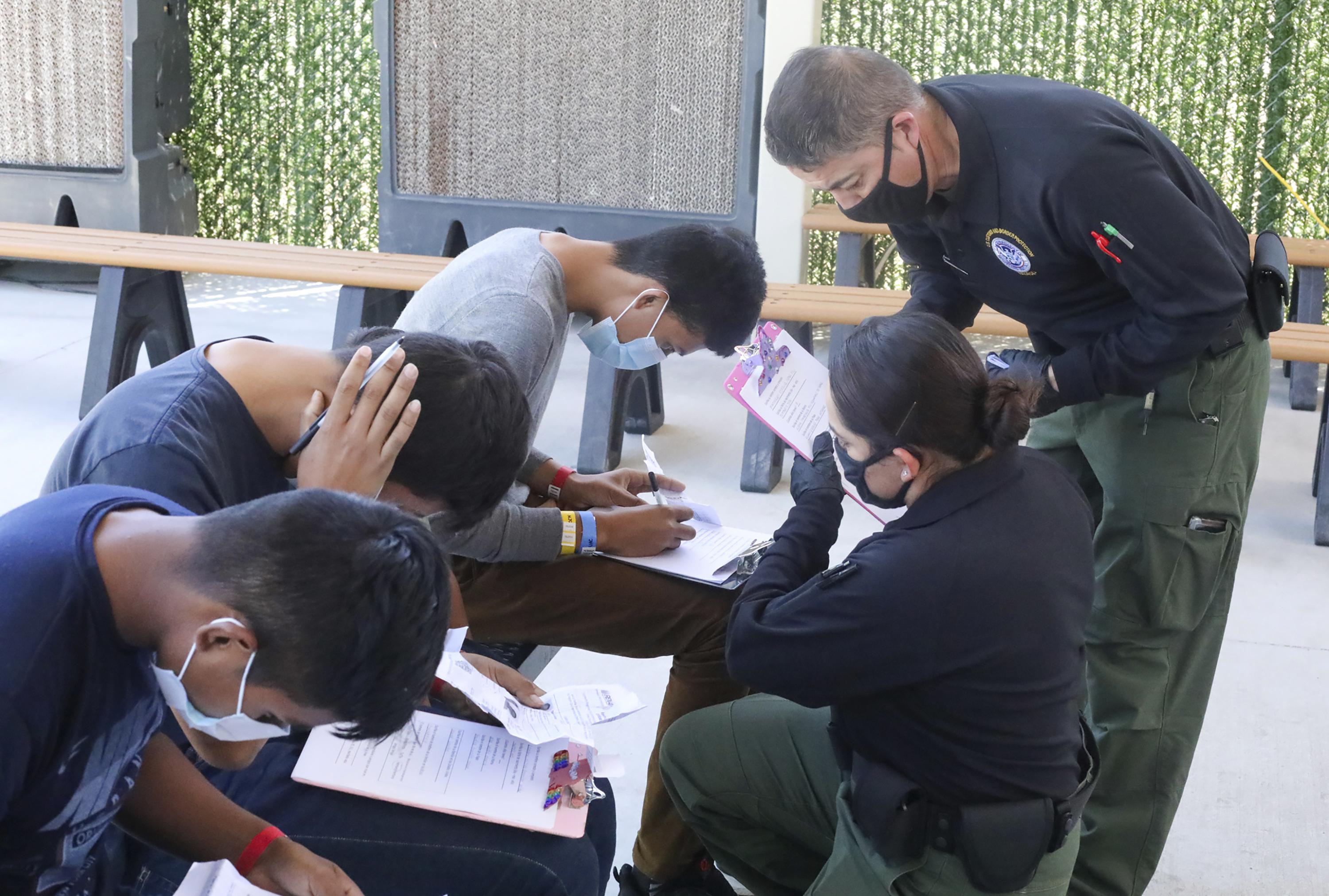 SAN DIEGO (AP) — Dozens, even hundreds, of asylum-seeking migrants often wait hours to surrender to U.S. Border Patrol agents, but the thousands of Haitians gathered at a bridge in the small Texas border town of Del Rio may be unprecedented and point to a glaring problem with the federal police agency’s staffing.

Instead of conducting patrols and uncovering smuggling activity, its agents spend about 40% of their time caring for people already in custody and administrative tasks that are unrelated to border security.

The agency hopes to free up agents to go back into the field by hiring civilians for jobs like making sure microwaved burritos are served properly, checking holding cells and the time-consuming work of collecting information for immigration court papers.

The Border Patrol graduated its first class of “processing coordinators” in January, with the goal of eventually hiring 1,200. The position requires less training than for law enforcement officers and pays less. It is also seen as a recruiting tool for an agency that has struggled to find qualified applicants, particularly women.

While it’s early to know if the new employees will pan out as hoped, the hiring plan’s initial reviews are generally favorable. Their skills will be in high demand as U.S. authorities respond to the Haitians who suddenly arrived in Del Rio and other large groups of new arrivals.

“This is a very, very good program. It is a very necessary program,” said Brandon Judd, president of the National Border Patrol Council, a labor union representing many of the nearly 20,000 agents. “It’s a program that will allow us to get more agents in the field.”

U.S. Rep. Nanette Barragan, a Los Angeles Democrat, told the members of the second graduating class in June that they were “pioneers.” She saw the need for their skills in April while visiting a holding facility in Texas’ Rio Grande Valley, the busiest corridor for illegal crossings from Mexico to the U.S.

Unaccompanied children were held at the facility for days, unable to call their parents, Barragan said. “Agents were working around the clock to process the children quickly, but they needed help,” she told the graduating class.

The need is especially acute during periodic spikes at the U.S.-Mexico border, including ones seen in 2014, 2019 and again this year. The coordinator positions are for 13 months, renewable up to four years.

Most single adults are expelled without an opportunity to seek asylum under a pandemic-related authority designed to prevent the spread of the coronavirus. Unaccompanied children and most families can seek humanitarian protection, giving them little incentive to elude capture because they will be released in the U.S. with notices to appear in court.

As a result, there are migrants who cross the border and wait – and wait – for agents to arrive, and who may require more care once they do. In August, families accounted for 41% of Border Patrol encounters, and unaccompanied children made up 9%.

Agents also complain they have less time to pursue migrants trying to avoid getting picked up.

A civilian coordinator assigned to a San Diego-area border station, Aide Franco Avalos, got a taste for the work in 2019, when she worked for the Transportation Security Administration at Palm Springs International Airport in California.

Franco Avalos volunteered for a temporary Border Patrol assignment in El Paso, Texas, and felt fulfilled caring for migrants. When she saw an opening in California that wouldn’t require a family move, the Los Angeles native decided on a career change.

“I wasn’t sure what I was getting myself into at first because it’s a brand new position, but I knew that my assistance to the agents was greatly needed,” she said.

Avalos would like to become a Border Patrol agent, but at 42, she missed the maximum starting age of 39.

Annual pay for processing coordinators is between $35,265 and $51,103, well below what agents earn. The Biden administration’s 2022 budget proposal says the position costs 18.5% less than an average agent.

The Border Patrol began to seriously consider creating the job in 2014. Discussions intensified when agents were again stretched by large numbers of asylum-seeking families and children in 2019, many from Central America.

“It becomes a bit repetitious and a bit frustrating that there’s no other option, right?” said Gloria Chavez, chief of the Border Patrol’s El Paso sector, who was deeply involved in the effort. “Who else can we lean on to help us with this task? So that’s when the conversation started.”

The agency also hopes the new positions will recruit future agents, including more women, who make up only about 5% of agents, Chavez said.

“The processing coordinators are going to be working hand in hand with our agents at the central processing center, and they’re going to be learning a lot of different skills, building up their confidence for everyone, and then maybe they want to apply for those jobs,” she said.

Melanie Garcia, 24, left her job as a prison guard in a psychiatric unit in Lubbock, Texas, to work as a processing coordinator at a Border Patrol holding center in El Paso. She wanted to learn more about the agency and to be closer to family. She said the job was “a really good stepping stone” to becoming an agent.