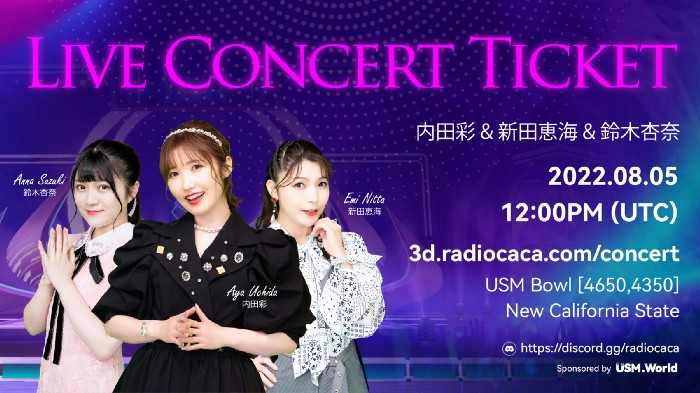 Building an ecosystem for the community unlocks the potential of Web 3 to connect people and experiences in a unique way that blurs the lines between the physical world and the metaverse.

Aya Uchida is a Japanese singer and voice actress. Her songs, including those from her hit album ICECREAM GIRL, consistently rank in the top 10 on the Oricon charts. Uchida is known for singing Kotori Minami in Love Live! School Idol Project and Kaban in Kemono Friends. She always makes a point of highlighting her love for life.

Emi Nitta, Japanese singer and voice actress, known for the voice of Honoka Kosaka in Love Live! and Tokoha Anjo in Card Battle!! Vanguard G. Her songs, including the hit singles “Rocket Heart” and “Next Phase,” consistently chart in the top 20 of the Oricon charts.

“We’re pushing the boundaries of the metaverse. With Summer Fantasy we show how USM.world starts to merge the realities between the physical and the virtual world. Live concerts will be one of our greatest gifts to this community that supports and motivates us to grow,” shared USM.world visionary Jeff Watney.

In addition to watching the show, USM.world offers a full tutorial to teach residents how to send gifts to each other and celebrities using U-RACA tokens.

USM.world is made by the community, so be part of the story they are making…