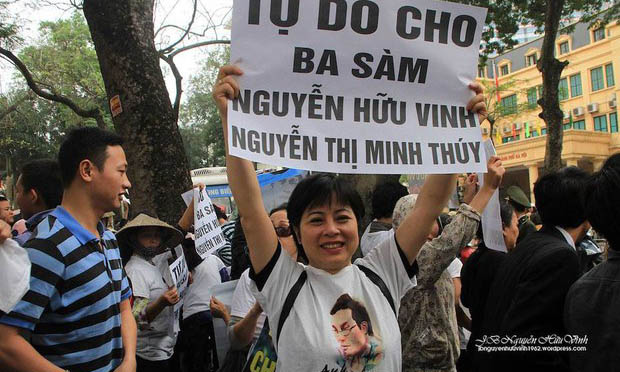 Dang Bich Phuong, a friend of Hanh’s family, said Nguyen Thuy Hanh, who also ran for office in 2016, was arrested Wednesday morning in her apartment hall.

“I asked Hanh’s sister, who is from Phu Yen, but did not receive the news directly. She heard about it from other relatives, ”she said, telling RFA’s Vietnamese Service on April 7.

Phuong added that the police officers present at the scene did not allow outsiders to take photos or film the arrest.

Also told RFA, former prisoner of conscience Vu Hung confirmed the arrest, said he left Hanoi when Hanh was taken away and had not heard of her arrest until more than 3pm, when he quickly returned. Hanoi.

“When I asked Hanh, a receptionist in her apartment complex told me she was arrested that morning,” Hung said. “She said that about 30 people were present at the arrest, and the police first read the arrest warrant and then sealed her apartment.”

A reporter phoned to ask the police of Thuong Dinh ward of Hanoi about the arrest when an officer refused to answer: “We do not know” and then hung up, while a receptionist at the Investigation Agency. Hanoi police said reporters should meet in person. agency to ask their questions.

Born in 1963, Hanh is a well-known Hanoi-based human rights activist and founder of the 50K Fund, established to provide financial assistance to family members of prisoners of conscience unable to travel. to the prisons where their loved one lives. be held.

Her account at Vietcombank was blocked in 2020 after she raised about 500 million Vietnamese Dong (equivalent to 21,600 USD) to support the family of Mr. Le Dinh Kinh, leader of Dong Tam commune, who was suffering security forces shot and killed in police raids. Dong Tam on January 9, 2020, amid a protracted land dispute that left many of his family in prison.

Hanh closed the fund at the beginning of December to provide treatment for her illness, but insisted she would continue to support prisoners of conscience.

Amnesty International urged Vietnam on April 1 to end its suppression of independent candidates running for the country’s parliament in a scheduled vote on May 23, saying that the two Members of the National Assembly will be arrested and charged under Article 117 of the Vietnam Penal Code for activities “against the State of the Socialist Republic of Vietnam.”

Le Trong Hung, a citizen journalist and member of Chan Hung TV – broadcasting live on Facebook on political and social issues – was arrested by Hanoi police on March 27, while blogger Tran Quoc Khanh was detained in Ninh Binh province on March 10, Amnesty said.

Emerlynne Gill, Regional Deputy Director of Amnesty International, notes that although Vietnam has recently introduced itself as a candidate for the United Nations Human Rights Council, based in Geneva, “[Vietnamese] the government is involved in blatant and widespread human rights abuses at home ”.

At least 173 prisoners of conscience known to have been held in prisons in Vietnam as of December 2020, Amnesty said in an annual report released April 6, ” the highest record since Amnesty International began publishing these figures in 1996. ”

“Of those, 72 have been detained for expressing opinions online, a significant increase from previous years,” added the human rights group. But prisoners of conscience in particular are subject to discrimination, harassment and abuse. “